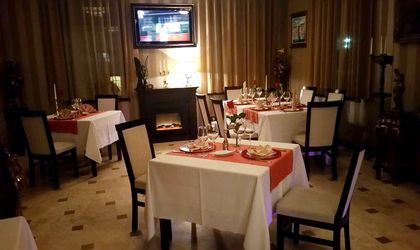 I was given the tip of Florian Gourmet. The name is so absurd I just had to visit, and all the more so after visiting their website. The menu looked exciting, so I telephoned them to book lunch. They confirmed my booking, so off I went with high expectations.

It is in a miserable part of town so you would have to make a journey specifically to get there, as there is no way you would be passing by and dropping in. But my heart sank as I entered the Odeon block, for I walked into a dark, gloomy hall. I asked the dark gloomy security guard if this was indeed Florian Gourmet and he confirmed that it was, but this was a lie.

He nodded towards a dark gloomy door, which, when opened, revealed a communist time warp. The décor was simply hideous. Red and gold chairs abounded in a dark miserable room with walls adorned with tasteless paintings in thick gilded frames.

I wanted to leave on the spot, but my sweet little Blondie has a far more tolerant nature than I and she was squealing and giggling as we envisaged the place in the 1960’s, resplendent with Ceausescu’s thugs packing it out. This picture became more realistic as we looked at the only other table, housing three old comrades, huddled together almost confidentially whispering to each other in an otherwise empty restaurant. Clearly old habits die hard.

The waiters were old miserable men, one of whom brought the menu, which was clearly headed ‘Zahana 33’. I protested that the security guard told me this was Florian. “You can’t go there and you must eat here” he said. I could scarcely believe my ears. ‘Can’t ‘and ‘must’ are two words that inflame me. But Blondie calmed me down, and after a heated exchange, she discovered that restaurant ‘Florian’ was simply another small room with a separate menu… and it was closed, so the booking confirmation they confirmed was another lie.

Reluctantly, I accepted the menu which I read with the help of several old table lights. These were not mood lights, they were necessary as the place was so dark and miserable. I shall not bore you with the prices, as I do not expect you to go there. Suffice it to say they were both reasonable and cheap.

Blondie ordered a foie gras terrine which, surprisingly, was both generous in size and well made. Naturally we had both wine for me, and water for Blondie. But my mood soured again as the bottles were never placed on the table, rather they were hidden by the waiter, thereby forcing him to attend the table and pour and forcing us to find him to pour! This infuriating old communist practice has largely disappeared from Bucharest restaurants – but not here. And as for my red wine – it was not just chilled, but ice cold. Doubtless Ceausescu’s cronies would have approved of freezing red wine, but I did not!

So away we went to the mains. I ordered a ‘Tournedos Rossini’. This dish was the darling of every restaurant in the world in the 1960’s. But since that era it fell out of fashion with diners and restaurateurs alike, and I could not help myself smiling at the unintended irony of this time warp House offering this quintessentially 1960’s dish in such a 1960’s environment.

In essence, a ‘Rossini’ is a fillet steak, topped with foie gras and a sliver of black truffle. Well, they got it right but instead of the sprinkle of Madeira wine they inexplicably added a slice of bacon. But beyond belief, the waiter failed to ask me how well cooked I wanted my steak to be. So it arrived, well made but cold!

Blondie chose a roast salmon with vegetables. It was precisely what it said it was on the menu. The salmon was a little too dry and the dish was overall, dull and boring. But this was not the fault of the chef – it was Blondie’s fault for not ordering something more adventurous. Her mashed potatoes were dry and almost cold. It needed to be ‘sexed up’ with olive oil and seasoning. But remember, those two items were never available, nor were they even demanded in communist times, and sure enough, and true to form, they were not on our table.

But we passed on so many clever creations. The Chef offered ‘guinea fowl with pears’. This is a perfect combination, with both fruit and bird complementing and balancing each other. In a similar fashion, there was ‘turbot fillet and mussels’ (midi). If he can pull this off daily, he has my respect because I am always frustrated by not having a dependable supply of fresh mussels. His ‘duck breast and red grape sauce’ also grabbed my curiosity.

As I read the menu, I am beginning to like the Chef more and more. He has thought out and planned so many perfect offerings. Let’s look at his cheese board. You get Camembert, Brie, Rebelchon and Roquefort, together with the obligatory grapes and apple slices. But again, the old communist habit kicks in, with each cheese on the menu listed at 40 grams. Why? It is so outdated. A cool House would wheel the cheese trolley to the table and cut off a slice of each cheese according to the customer’s wish. Not here. Can you picture the ludicrous sight of the House weighing each portion before delivering it to the table?

I laughed at the ‘brain and balls’ offer, with ‘veal brain, pork testicles, marrow jelly and sweetbreads’. Oh no, not for me. But many communist pensioners would think they are in heaven with this lot. His dishes containing marrow fat are surprisingly becoming leading-edge creations in French cuisine. As too are his ‘pig tail, feet and ears in garlic and aspic’. Paradoxically this Romanian staple is now leading edge in France and Spain.

Based upon the creativity of the menu, together with the evidence of the food we ate, I sincerely believe that the Chef has got his act together and has real talent. The only downer is that it is a tragedy that the place is such a dump.