EU’s largest sturgeon breeding farm will be in Romania 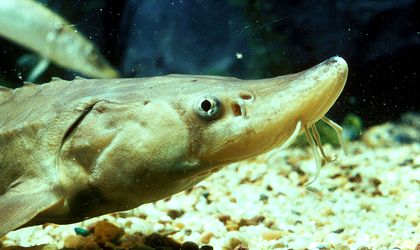 In Tamadau village, the southeastern Calarasi county, it will be opened the largest wild sturgeon breeding farm starting this October, with the facility to start operating in 2014.

The investments in the breeding farm began nearly ten years ago, and while it was originally able to breed 200,000 fry, its capacity will reach 500,000 fry following the project funded by the EU that is currently under way, according to Agerpres newswire.

In order to develop the Danube sturgeon population on the long-term, the programme aimed at re-inhabiting the Danube with such fish should continue, a programme initiated by the Romanian agriculture ministry that has been stopped for three years amid a lack of funds.

The situation of the sturgeons in Romania

According to a World Wide Fund (WWF) report, Romania and Bulgaria, which were the most important exporters of caviar of the wild Danube sturgeon, currently own the largest wild population of this species in the EU, which the Romanian authorities believe to be endangered due to illegal use.

In June this year were presented the results of the first national study of attitudes towards the conservation of Danube sturgeons in Romania. According to the WWF, in order to gain knowledge of the attitudes towards the conservation of Danube sturgeons and the efficiency of current measures, WWF conducted research among all stakeholders – fishermen along the Danube and from the Danube Delta, government representatives, enforcement agencies,  caviar producing companies, and the general public.