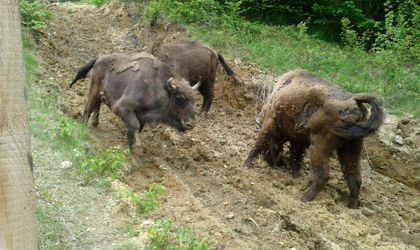 17 European bison were brought to Romania by Rewilding Europe and WWF, thus being the largest-ever bison reintroduction in Europe. The animals came from wildlife parks and breeding stations across Europe, from Sweden in the north to central Italy, after several logistic operations, informs WWF Romania in a press release.

The wild animals are now settled in the Tarcu mountains, Meridionali Carpathians, in a reservation situated in Armeniș village, Caraș-Severin county. A completely new bison population is being established in the area, meaning that within ten years is planned to have a population of about 500 wild bison.

The continent’s largest wild land mammal was hunted to extinction, until it finally died out in the wild in 1927, with only 54 individuals remaining, all in captivity, says WWF Romania. The global population of the European bison is now said to be 5,046 (Jan 2014). Of these, only some 3,230 live in free or semi-free herds.

The reason for bringing these wild animals in Romania is that the Carpathian Mountains have been identified as a priority region for improving the long term survival of the bison. The place where the animals are released is in the vast and wild Tarcu Mountains Natura 2000 site, with a surface of around 59,000 hectares. The organizations involved in the project said that these bison will not be fed or handled, but treated completely like the wild animals they are, so that they become a full part of their ecosystem and the natural processes there.

“This initiative shows that there are huge opportunities for wildlife comeback in Europe”, notes Frans Schepers, Managing Director of Rewilding Europe. “It is heart-warming to see how the community of Armenis has embraced the coming of this wonderful animal into their area. By bringing the bison back to the Tarcu mountains, we hope to stimulate a comeback also of the other main wildlife species here, such as red deer, roe deer, chamois and the carnivores connected to them. Rewilding Europe wants to make a significant contribution to the survival and comeback of this the largest land mammal in Europe, still listed as vulnerable on the IUCN Red List. ”