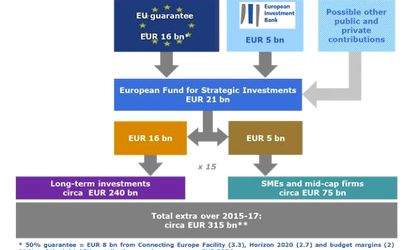 The European Commission announced a EUR 315 billion investment plan aimed “to get Europe growing again and get more people back to work.”

The Plan is built on three main strands: the creation of a new European Fund for Strategic Investments (EFSI), guaranteed with public money, to mobilize at least EUR 315 billion of additional investment over the next three years (2015 – 2017); the establishment of a credible project pipeline coupled with an assistance program to channel investments where they are most needed; a roadmap to make Europe more attractive for investment and remove regulatory bottlenecks.

According to European Commission estimates, taken as a whole, the proposed measures could add EUR 330 – EUR 410 billion to the EU GDP over the next three years and create up to 1.3 million new jobs

“If Europe invests more, Europe will be more prosperous and create more jobs – it’s as simple as that. The Investment Plan we are putting forward today in close partnership with the European Investment Bank is an ambitious and new way of boosting investment without creating new debt. Now is the time to invest in our future, in key strategic areas for Europe, such as energy, transport, broadband, education, research and innovation. I am now counting on the European Parliament and on Member States to pitch in and do their part to get the new European Fund for Strategic Investments up and running as soon as possible. Europe needs a kick-start and today we are supplying the jump cables,” said Jean-Claude Junker, the European Commission president.

The Investment Plan will unlock public and private investments in the real economy of at least EUR 315 billion over the next three years (2015-2017). At a time when public resources are scarce while financial liquidity exists in financial institutions and on the bank accounts of individual and corporations, ready to be used, the challenge is to break the vicious circle of under-confidence and under-investment. The Investment Plan foresees a smart mobilization of public and private sources of finance – where every euro of public money is used to generate additional private investment, without creating new debt.

A new European Fund for Strategic Investments (EFSI) will be set up in partnership with the European Investment Bank (EIB). It will be built on a guarantee of EUR 16 billion from the EU budget, combined with EUR 5 billion committed by the EIB. For every public euro that is mobilized through the Fund, EUR 15 of total investment, that would not have happened otherwise, is generated.

The focus of the Fund should be to invest in infrastructure, notably broadband and energy networks as well as transport infrastructure in industrial centers; education, research and innovation; and renewable energy and in SMEs and middle capitalization companies.

European Investment Bank President Werner Hoyer said: “We have ample liquidity in Europe, but we don’t have enough investments. We are faced with a crisis of confidence, so the challenge is to re-connect private investment with attractive projects. To achieve this, we need to take on more risk to encourage project promoters to launch their investments. The new “European Fund for Strategic Investments” will provide targeted, catalytic risk bearing capacity for economically viable investments, building on the Bank´s expertise and experience in selecting and managing projects. This will be accompanied by other initiatives such as lifting regulatory hurdles and putting in place an investment advisory service to boost project development and preparation across Europe.”