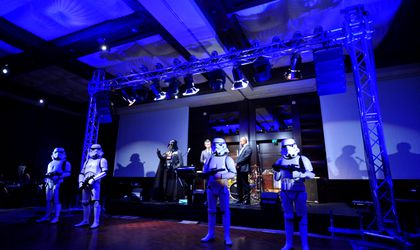 The twelfth edition of the Edelweiss Charitable Ball raised EUR 130.000 to support free services for children and adults with incurable diseases provided by the Hospice Casa Sperantei Association.

At this year’s edition of the ball, which gathered more than 300 guests, the central piece of the auction was the original Olympic torch from London, brought by Frantisek Vlk and auctioned for EUR 15,000. Other items that were auctioned were the Grand Prix VIP tickets, a dinner on the Arch of Triumph, objects donated by Hollywood stars, diamonds jewelry offered by Sabion, as well as a visit to a movie set and a meeting with director Terry Gilliam.

The entire amount of money will serve for the construction of another Hospice Center in Bucharest, a center for Palliative Care for children and elders.

The evening dress code was the 1920s. Special moments of the evening were presented by the magician Robert Tudor, Capriccio Cvartet and the Big Band Radio, conducted by Ionel Tudor.