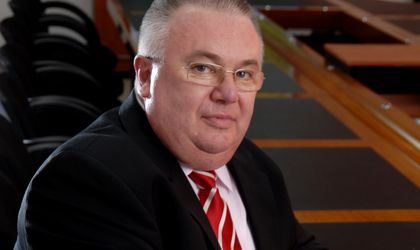 Although the first selective collection projects started 11 years ago, the growth pace of local recycling activities has been slow. Cristian Popescu, general manager of Eco-Rom Ambalaje, tells BR what obstacles the Romanian recycling system faces. But he adds that there are countries that are champions in recycling which could serve as an inspiration.

“Romania’s recycling capabilities as far as packaging waste is concerned have reached approximately 900,000 tons, which is far above what is recycled presently. So we have enough recycling capacities at national level; all we have to do is selectively collect more and do it in an increasingly effective way,” Popescu tells BR.

For the past 11 years, the selective collection and recycling of packaging waste in Romania have been mainly supported by the industry. The contribution of Eco-Rom Ambalaje members alone has exceeded RON 5.2 million, according to Popescu.

Eco-Rom Ambalaje meets 62 percent of Romania’s obligation to recycle packaging waste, according to 2012 statistics from the National Agency for Environment Protection.

“Due to these investments, approximately 50 percent of Romanians have access to a selective waste collection system with containers or colored bags, following partnerships we have signed with 527 local authorities and 100 sanitation companies,” Popescu says.

As part of this system, developed by Eco-Rom Ambalaje along with local authorities and sanitation companies, the public has access to approximately 17,000 colored containers.

Neighborhoods with houses have a selective collection system in place involving colored bags.

At local level, independent selective collection infrastructure has been implemented by the Eco-Rom Ambalaje partners with European funds. Part of this is already deployed across the country, while the rest will become available to the public soon.

One of the reasons for the slow progress made by Romania in the recycling field is the fact that the system is still a voluntary one, when it should become compulsory, as is the case in the European states that are now recycling champions, Popescu argues.

Since national statistics show that approximately 40 percent of the Romanian population does not even have sanitation facilities, selective waste collection is out of the question, he points out.

However, Romania has had to comply with certain legal obligations since 2012, as local authorities had to achieve a 15 percent reduction in the quantity of waste reaching landfills and dumps.

Romania is also under the obligation to institute, by the end of 2015, a national selective collection system for four categories of waste: plastic, metal, paper/cardboard and glass.

“But at the same time, we do not have clear deadlines for the completion of the management systems implemented from European funds,” notes the general manager.

The problems in the system do not stop here. Recycling companies are confronted with various legal obstacles that have to do with the unclear roles that actors in the system should play. The law gives vague definitions of household and municipal waste while waste management data are not consistently and fully recorded.

On top of that, the penalties stipulated by law are not applied, Popescu adds.

“Recycling should not require an effort from the public. People should have a selective collection system that is accessible and located as close to their home as possible. They must become aware that collecting waste separately should become a habit and not something to be rewarded. Secondly, laws must be applied strictly, including the penalties in the legislative package,” argues the GM.

He also suggests other measures that could be applied, such as charges to use dumps, which would discourage this practice to the benefit of recycling.

The “pay as you generate” principle should also be applied, under which each citizen pays a sanitation tax based on the quantity of waste they generate, while separate collection should be free.

Garbage chutes for buildings that have more than eight stories should also be done away with.

“We should be aware that changing Romanians’ recycling behavior will take time. European countries that are high performers in this field teach us that education and public awareness must come alongside laws and the penalties applied when they are not respected. Such a system can only work on a small scale voluntarily. When we realize this, we will probably get good results in recycling,” says Popescu.

But Romania does not have to start from scratch in this, because it has inspiration sources. Belgium is one of the countries that recycle the most, with an 85 percent recycling rate and 90 percent value extraction from the total waste generated. “Their recipe seems simple: 20 years ago, an efficient selective waste collection system was created in which roles are very clear and Belgians are encouraged and compelled to collect selectively,” outlines Popescu.

In Belgium, the selective collection system for the public is implemented based on agreements between the organization in charge, the local authorities and the sanitation operator, on the one hand, and the recyclers, on the other.

The system is implemented through igloo-like collection bins or colored bags. Belgium also applies the “pay as you generate” System.

Household garbage bags are very expensive; for instance, a 60 liter bag costs EUR 2.5. However, selective collection is free of charge or comes at a cost that is 20 times lower than for household waste, says Popescu.

“Since 2010, everyone in Belgium is compelled by law to separate their waste. If they fail to do so, fines can even amount to EUR 175 per person, if recyclable waste is mixed with residual waste. Depositing rubbish at the dump is also very expensive, after the government set a EUR 70 tax per ton of garbage. There are also very high penalties for city halls that do not implement a selective collection system. We are talking about a sum of factors that work if they are applied at the same time and which boost recycling performance,” says Popescu.

Romania has some flagship cities in packaging waste recycling. In Sfantu Gheorghe and Zalau, the average inhabitant separately collects over 1 kilogram of recyclable waste per month, three times the average quantity of waste recycled in Romania.

For the quality of recycling services, Medias, Deva and Ploiesti are leading the way.

And for the degree of involvement in the promotion of selective collection to citizens, Brasov and Targu Jiu deserve a mention, Popescu tells BR.