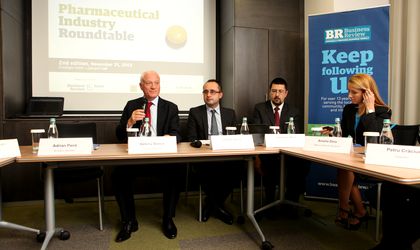 The inclusion of up to 141 new drugs on the reimbursement list from next year and the pitfalls of the current clawback mechanism were the focus of debate during the second annual Pharmaceutical Industry Roundtable, organized recently by Business Review.

The clawback, which was introduced in 2009 as a means to control the consumption of reimbursed pharmaceuticals, has raised numerous challenges for producers, who claim the tax is both discriminatory and unpredictable.

“It is wrong for holders of wholesale distribution authorizations (APP) to pay a contribution for part of the deficit created by distributors and pharmacists that do not pay this tax,” said Dragos Bogdan, partner at law firm Stoica & Asociatii. He suggested the clawback contribution be based on the sales level and not the reimbursement value of the drugs.

“The current way in which the communication of consumption values is organized from an administrative point of view presents legal risks, as it could be successfully challenged at the Constitutional Court,” says Bogdan, whose firm has won favorable court decisions for some producers. BBraun Medical Romania, a producer of generic drugs operating a plant in Timisoara, is involved in litigation with the Romanian authorities over the clawback.

“We are all frustrated by this tax which has a lot of incorrect elements,” said Amelia Dinu, general manager of the producer.

Despite ongoing litigation against the state over the clawback, Cristian Busoi, president of the National Health Insurance House (CNAS), hinted that any change in the tax could come into force only from the second half of next year. “If new medicines are included on the list, the consumption could be very high. We can consider this (e.n. an increase in the threshold of reimbursed drugs) because it will be harder to sustain, and maybe it is not fair that all the costs of patients’ access to new medicines be borne solely by the producers, for as much as one year,” said Busoi.

The authorities are currently grappling with a reduction of collected clawback from RON 1.5 billion (EUR 338 million) last year, to “a little” over RON 1 billion (EUR 225 million) this year, according to Busoi, who cited various factors behind the drop, including the exclusion of VAT from the calculation of the tax.

The government is aiming to increase collection to RON 1.9 billion (EUR 427 million) next year, not including any update of the reimbursed drugs list.

Mihaela Iancu, head of the pharmaceuticals and medical devices departments within the Ministry of Health, said the ministry wants the updated list to come into force in January 2014, five years since the last time new drugs entered the reimbursement system.

Iancu added that the authorities are working closely with the European Commission and the World Bank on overhauling the drug pricing and clawback system, but did not mention a timeframe for these efforts.

Under the current clawback system, producers of innovative medicines and generics, drugs with expired patents, are subject to the same level of taxation, and the Ministry of Health has hinted at the possibility of capping the tax on the cheaper drugs. “The generics need a lower clawback because their price is fixed at 65 percent of the price of the original,” said Laurentiu Mihai, executive director of the Association for Generic Medicine Producers (APMGR).

Luca Visini, general manager of Eli Lilly, a member of the Romanian Association of International Medicine Manufacturers (ARPIM), said the differentiated clawback would not be sustainable because it would increase the burden on innovative producers.

Even the CNAS president acknowledged the differentiated tax would present additional technical challenges, although he said the insurance house was open to discussing the proposal.

The clawback contribution, which averages at 15 to 20 percent of the turnover, has had a debilitating effect on a market that is seeing sluggish growth. “In my view, the clawback is a mechanism that delivers results, from the experience of other countries, if its value does not exceed 10 percent,” said Petru Craciun, general director at Cegedim, a data provider for the pharmaceuticals industry.

According to Cegedim data, the pharmaceuticals market grew by 1.8 percent to EUR 1.9 billion in the first nine months of the year. Third quarter sales lost 1.6 percent, driven by an 8.2 reduction in the hospital segment.

Craciun forecasted the market would grow by 2.7 percent next year, expressed in RON, based on a moderate update of the drugs list.