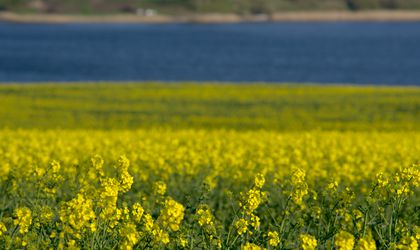 This year’s drought has compromised much of the autumn harvest, according to farming officials.

The 2015 production of vegetables and fruits will be a fifth lower because of the prolonged drought, and starting this autumn the prices of these products could grow significantly, according to Aurel Tanase, executive director at Prodcom Vegetables-Fruits Inter-professional Organization.

“The drop in the production of vegetables and fruits will surpass 20 percent this year because of the drought, particularly in the case of crops that grew during the hottest period. At this time the market is sufficiently well supplied from domestic production, it is diverse and there are no problems. We got through August well because people were on vacation and consumption was lower; however, lately there is an interest in products needed for home canning,” added Tanase.

The director said that he has asked the Agriculture Ministry for financial aid for vegetable and fruit producers that suffered losses because of the drought; however, work is currently being done on working out the affected farms.

Quoted by Agerpres, Daniel Constantin, minister of agriculture and rural development, said, “While the 2014 crop per hectare was 3.64 tonnes, in 2015 it is 3.68 tonnes. The total amount of wheat harvested, according to the data we have so far, is 7.5 million tonnes compared to 7.4 million tonnes in 2014.”

Constantin added, “The average yield per hectare obtained from barley was 4.03 tonnes, while in 2014 it was only 3.8 tonnes, and the total amount collected reached 1.051 million tonnes. For rapeseed, yield per hectare has suffered in the sense that we have a lower production, but not dramatically, at 2.36 tonnes, compared to 2.57 tonnes per hectare in 2014, and total output is 956,886 tonnes,” said the minister.

Constantin stated at the end of talks within the Lower Chamber’s Agriculture Commission that EUR 145 million would be included in the Agriculture and Rural Development Ministry’s (MADR) 2016 budget to begin to improve the main irrigation infrastructure.

“We came for a concrete reason – to propose to the Agriculture Commission at a technical level and then to the political parties the signing of a seven-year political agreement to finance the renovation of the main irrigation infrastructure. I was glad that at a technical level all those present directly or indirectly agreed with this initiative and there is hope we will also reach a political agreement in the following period. From 2016, we will separately include EUR 145 millions in the MADR’s budget and I would be glad for this to continue because you cannot rehabilitate the entire irrigation infrastructure in only one year,” Constantin told the commission.