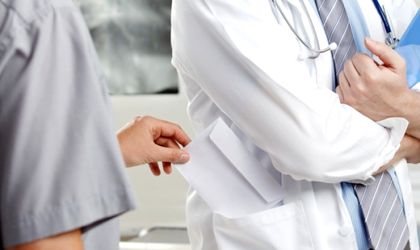 Prime minister Victor Ponta announced that the Government has in view a potential bribe law aiming to tax “money envelopes” that doctors receive, according to Mediafax. The law would make it legal for doctors to receive the extra money from a patient only if it is not conditioned by the doctor and if it takes place after the medical act has ended.

The Doctors Alliance has taken a firm opposing position regarding this bill, stating it would be degrading both to the doctor and to the patient. The statement underlines the fact that people already pay a monthly tax for medical care and this one would only double money the state already takes for the same medical services.

“As physicians we want to spend time with patients talking about what treatments and solutions there are to their problems, not to make financial negotiations. If such an aberrant law passes, it means that hospitals will have a ‘Guide for good practice on how to give and receive legal bribery’,” medical professionals say.

“Money exists in the health system, but are poorly managed by people appointed in political functions who do not care for the doctors or for the patients’ fate,” the statement concludes.

Warning politicians that they should prioritize modernizing the health system over passing a bribe law, the Alliance representatives have opened a Facebook group for discussions on the situation.

PM Ponta has also announced that health professionals will benefit from 25 percent bigger salaries starting October 1, 2015, saying that an emergency ordinance regarding the growth of the salary for medical staff as well as a bill regarding the status of the doctors should be ready for the government session on August 26.