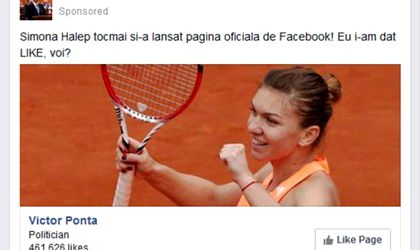 In an attempt to have more Facebook likes, the Romanian PM Victor Ponta, who also runs for presidency, tried to trick the public into making his Facebook page popular by pretending it belonged to Wimbledon finalist Simona Halep, writes British publication Daily Star.

The Romanian tennis player who currently ranked #2 in women’s singles didn’t have an official Facebook page until recently, when she decided to publish one. In order to obtain more “Likes”, Ponta posted a picture of her to his Facebook page and wrote: “Simona Halep has just launched her official Facebook page! I LIKE it, do you?”, as the publication mentioned above has noticed. Although a picture of Halep was next to the “Like” button, the page actually shared in the sponsored post is Ponta’s.