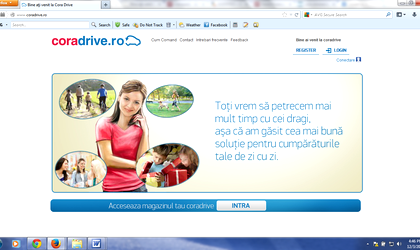 Romania Hypermarche, the company operating the Romanian Cora hypermarket chain, has launched the first local drive-through service which for now is available in its Lujerului hypermarket in Bucharest.

Customers can buy the products online and later pick them up at hypermarket. The minimum order is RON 50 (approximately EUR 11.25). They can choose from over 8,000 products but their number will go up over the next period, said Claudia Mirica, the general manager of Cora Lujerului.

While the service (coradrive.ro) is a novelty for the Romanian market, in France it is available in over 2,400 locations. Cora offers the drive-through service in 56 stores in France and now hopes to replicate its success in Romania also. The service targets some 380,000 of Cora’s more than 2 million customers who regularly shop online, said Mirica.

The target for the first year is for the drive-through service to generate some 5 percent of the hypermarket’s turnover and for the value of the average receipt value to be 40 percent higher than the regular in-store receipt value, added the general manager. Should results be positive, the service will be made available in other Cora hypermarkets, she added, without offering a concrete timetable. Until then, the retailer plans to launch home deliveries in the first part of 2014.

Cora’s announcement comes after this July Carrefour Romania launched an online store, the first of this kind in Romania.

Cora operates a network of 12 hypermarkets in Romania. This July the company opened the EUR 51 million Cora Bratianu shopping center in Constanta. The 50,000 sqm retail project is anchored by a 8,600 sqm Cora hypermarket. In September it opened another hypermarket in Ploiesti.