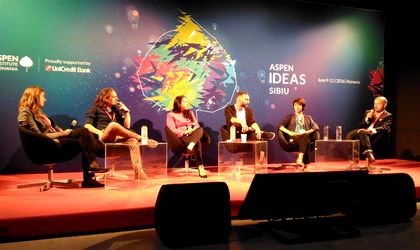 The four finalists Romanian cities for the title European Capital of Culture, Baia Mare, Bucharest, Cluj-Napoca and Timisoara, set together for the first time in front of an audience to offer an immersion experience for ideas and solutions regarding the topic. The event took place at Aspen Ideas Sibiu organised by Aspen Institute Romania during Sibiu International Theatre Festival. The finals will be held in mid-September.

Baia Mare presented their bid under the slogan of “Culture of Hosting”. Currently, the proposed budget is EUR 40 million of which EUR 26.5 million would be allocated to programme, according to the report provided by Selection of the European Capital of Culture in 2021 in Romania – The Selection Panel’s report Pre-Selection Stage.

“This is not a beauty contest, this is about the city which dares to dream big,” started the discussion Vlad Tăușance, the artistic director of Baia Mare 2021 European Capital of Culture. “Also, Baia Mare team is more like a startup, if we compare it with Bucharest or Cluj – true corporations, and we have all the advantages of a startup: we are agile, we are fresh and we don’t have any pressure from our stakeholders. On the other hand, we are a small team, we started competing for this title for less time than the others,” added Tăușance. “But we can be a positive case study for urban regeneration or a case study for how an industrialised city had its cultural facelift,” continued the artistic director of Baia Mare 2021 European Capital of Culture.

Asked for whom is the project intended, Vlad Tăușance stated that “right now we are just names on a map and we all fight with some stereotypes. But what this contest does is to transform everything in something for the cities we fight for. We are beginning to represent something for the community and this is probably the best achievement so far. Also, we are those who are changing the local authorities budgets, putting on their list more than a concert or a local celebration, bringing culture closer to our communities”. He also explained that this competition is about networking and working together and actually change something on a national scale.

Editor’s note: Baia Mare had a landslide victory in the recent local elections although the mayor is behind bars and there is still a debate about the wall which separates the Roma people from the rest of the town. Despite these contrasts, the city planned its urban regeneration years ago, being the first Romanian town which went through a complete facelift of the old city centre, back in 2004, for a total cost of EUR 4.3 million.

The Bucharest bid is centred on the theme of “in-visible city”. According to the report given by Selection of the European Capital of Culture in 2021 in Romania – The Selection Panel’s report Pre-Selection Stage, the proposed budget is EUR 75 million of which EUR 52.5 million would be allocated to programme expenditure.

“The best way to deal with this project is to rebalance what Bucharest means. Bucharest is a very complicated and complex city, it has a lot of issues and debates between individuals, the stakeholders and the local authorities, and it’s quite difficult to work together if we take into consideration the size and the scale of the city. So our bet is to see if all these entities can have the same conclusions and if they can work together for a better city – to have and to implement a balanced program,” explained Raluca Ciuta, ARCUB & Bid Manager, Bucharest 2021 European Capital of Culture.

“In the end, it will be only one city winning, and there are a lot of questions to be answered, where did the money go, who decided for them, which is the return on investment and of course, all of us have to answer to these questions and the reality for Bucharest is actually to deal with this lack of trust and to work together for a common program which can remain as a starting point for a long term strategy,” summed up Anamaria Vrabie, the curatorium member of Bucharest 2021 European Capital of Culture.

Editor’s note: the capital of the country is by far the most privileged in this competition. I am only mentioning the importance of having cultural hubs which can provide funding for cultural programs, and on this matter, Bucharest has two organisations, ARCUB and CreArt.

Cluj-Napoca presented their bid under the banner of “East of West”. For this project, the proposed budget is EUR 35 million of which EUR 24,5 million would be allocated for programme expenditure.

“What we have to highlight is that this contest puts culture on the local authorities agenda, and whether we are winning it or not, it’s actually a victory for community,” said Ștefan Teișanu, the executive director of Cluj Napoca 2021 – European Capital of Culture. “Moreover, we – the candidates which are still in competition for this title, started to have a real talk about developing together cultural strategies, which is probably the best thing such a contest can bring,” underlined Teișanu.

“When you look at the society from the inside – this is culture (…), and this is how we built our project. We are doing it for the society to bring culture inside,” answered Ștefan Teișanu at the question regarding for whom Cluj is doing the project.

Editor’s note: Cluj-Napoca’s cultural program is blooming for several years now on all levels, starting with the film industry which managed to put Romania on the international festivals’ list. Moreover, the city was also the European Capital of Youth in 2015, thus making them in some way professionals on how to deal with European agenda. Also, the IT sector has an important component there and creative sector, alongside with the startups, have several facilities.

Timisoara presented their bid under the title “Shine your light; light up your city!”. The projected operating budget is EUR 48.5 million of which EUR 33.9 million would be allocated to programme expenditure, notes Selection of the European Capital of Culture in 2021 in Romania – The Selection Panel’s report Pre-Selection Stage.

“For this project, Timisoara is redefining it’s cultural identity, having also a closer look on what history has taught us. This journey started back in 2010, when we first met and talked about which added value can bring Timisoara to Europe nowadays. You have to find an engine to make all this work, to lighten up everything – as our slogan says, and we believe we found it,” declared Simona Neumann, the executive director of Association Timisoara – European Capital of Culture.

“One of the greatest achievement for our project is the team of volunteers – the people are so different, but they all want to help Timisoara to stand for this title,” said Simona Neumann while explaining for whom this project is.

Editor’s note: Currently, the old city centre of Timisoara had it’s facelift, after an investment of RON 65 million, which started in October 2013 and finished in late December 2015, with the support of EU fundings.

The selection’s criteria for the title of the European Capital of Culture are contribution to the long term strategy of the city, European dimension, cultural and artistic content, capacity to deliver, outreach and management. On the first bid, 14 Romanian countries were competing for this title. Moreover, the Romanian Ministry of Culture has promised to support these cities cultural programs by funding some of them. Business Review will follow up on this topic.