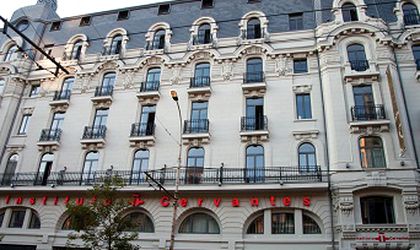 Instituto Cervantes hosts this week, between February 6-9, a marathon of contemporary Mexican films. All films have English subtitles. Entry is free of charge. For reservations, you can email cult3buc@cervantes.es or call 021.210.27.37.

The movie program is:

IMDB description: In Mexico, two teenage boys and an attractive older woman embark on a road trip and learn a thing or two about life, friendship, sex, and each other.

IMDB description: Intertwining stories of abuse, adultery, and anorexia center around a family and with obsessed mother living in Mexico City.

Description: Toño and his wife, Ana, decides to move back to their home village where they parents are still living, after a long stay in Ciudad de Mexico. When Toño meets Andrea, a friend of youth, and they start an affair repressed when they were young.

Rottentomatoes description: A thirty-something couple who met and married before the malaise of adulthood and responsibility took hold struggle to recapture the lost dreams of their youth in a romantic comedy starring Jesus Ochoa. Julia and Moises were idealistic and passionate when they exchanged their wedding vows, and they never imagined that their union would lead to a stagnant life of complacent mediocrity. Determined to re-ignite the passion that fueled their romance back in the beginning, the pair soon find their efforts complicated when Julia is pursued by a handsome young student activist.

IMDB description: An unlucky-in-love graphic designer catches her boyfriend cheating on her and decides it’s better to play the field than settle down.

IMDB description: A real-time dark comedy about a science geek who tangles with a clutch of Russian gangsters after he delivers them the wrong computer disk.

IMDB description: Renata is a young high-class girl and Ulises is a poor guy. They both fall in love, but they must fight against everyone, specially Renata’s rich parents, who want to stop their love by sending her to Canada. The story remarks the difference between social classes in mexico City, and their characters risk everything just to save their love.

Rottentomatoes description: During a family dinner in honor of his birthday, patriarch Rodrigo Carnicero (Xavier Masse) drops dead of a heart attack. Among the witnesses are his devoted daughter Pureza (Pilar Ixquic Mata) and his beloved grandchildren Rocco (Osvaldo Benavides) and Rodrigo (Rodrigo Cachero).