Contactless technology moves closer to the skin with wearable devices 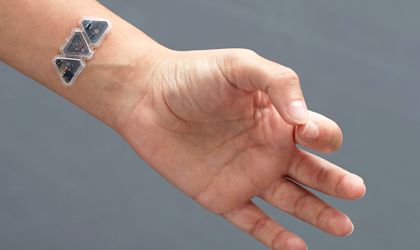 Small change is designed for the transition period from cash to digital payments and assisting consumers in making lower value digital transactions. The aim is to facilitate the transition from coins in that allows users to “collect” change on a wearable device. An electronic display shows the available funds on the account and can be customized for various uses – for example, a design conceived for young people who want to save pocket money.

The Budgeteer is a wearable payment device placed on the wrist, designed to help the user organize and manage expenditures made at POS by simple hand motions. By using three intuitive and simple hand movements, users can classify payments in three categories (expenses for work, for home or personal), which will be highlighted by different colours in the internet banking account.

Thread is a brooch that connects reality with the virtual world through a functional application via Bluetooth, transforming fans of fashion in easily identifiable ambassadors of the brand. The brooch was designed to be launched with certain brands or stores, and its design can be adapted. A scanner of finger blood vessels offers safe shopping via a small biometric authentication system.

Outside the store, consumers who wear the brooch can recognize each other by mobile phone camera, they can see shopping they’ve done and give marks to each other. Best rates of certain clothing items are converted into benefits – discounts, VIP tickets, private screenings – offered by the brand to the brooch holder, making it an innovative approach to traditional cards or loyalty schemes granted by a specific brand.