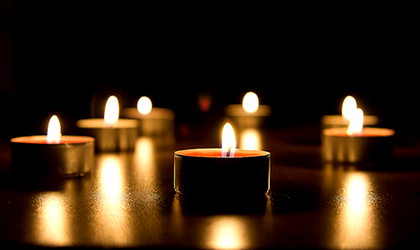 November 20: A young woman who had been transferred to  specialized clinic abroad has died during the night, bringing the death toll to 58. Andreea Stefan had suffered extensive burns and had been transferred to a burns clinic in Germany where she underwent procedures for skin grafts. She had been in an induced coma and was awakened on Thursday. According to reports, she did not react well and doctors decided to put her back into a coma, but she died during the night.

In Romania there are 44 injured hospitalized, of which 11 are in critical state, while in hospitals abroad there are 31 people, most of them stable.

November 19: Another life was lost on Thursday, bringing the number of deaths to 57. Ana Albu, a young woman who was hospitalized at the Burns Hospital, was a Great Britain resident who had gone to the club to celebrate her birthday.

November 16: With the loss of one more injured on Monday morning and one on Friday, the death total reached 56.

On Friday Loredana Darescu, 29, who had been transferred to Germany lost the fight, while on Monday 18 years old Ioana Geambasu died in a Bucharest hospital. The student had just celebrated her 18th birthday in August and wanted to become an architect.

November 12: On Thursday evening the number of deaths caused by the Colectiv club fire reached 54.

The latest death was that of 22 years old Claudiu Bogdan Istrate, who had been hospitalized at Bgdasar-Arseni, in a critical state. The hospital still has 12 wounded in the fire.

During the night two other victims who were at Floreasca hospital have lost their lives, one of them being Goodbye to Gravity vocalist’s girlfriend, Madalina Strugaru. The band’s vocalist, Andrei Galut, is currently in a hospital in Holland.

Alexandru Pascu, the bass player of the Goodbye to Gravity band has died during his transfer to Paris last night. The fire also claimed the lives of the two guitar players, Vlad Telea and Mihai Alexandru soon after the incident, while the band drummer, Bogdan Enache, died on November 8.

November 11: The death toll following the fire in Bucharest’s Colectiv club continues to rise after the unfortunate event, with 50 people having lost their lives until now, according to media reports. The last two people who died had been transferred to England, and their names have not been disclosed yet.

Another young person, Tudor Golu died on Tuesday in a hospital in Great Britain due to respiratory complications and burns that covered a large surface of the body. He was a graphic artist and guitar player in the Axial Lead band and he also shot the video of the song The Day We Die of the Goodbye to Gravity band that was holding the album launch during the night of the fire.

November 10: According to state secretary Raed Arafat, 83 people are still hospitalized in Bucharest, 15 of them being in critical condition, 6 in serious condition and 61 stable. All the 10 wounded who were transferred on Sunday reached the hospitals in Great Britain and Norway safely.

More than 20 patients have so far been transferred to hospitals abroad, in Israel, Germany, Austria, Belgium and The Netherlands.

This weekend was particularly grim, claiming the lives of 13 of the fire victims who were hospitalized in critical conditions, either in Bucharest hospitals or in hospitals abroad.

“This is the period of major respiratory complications. This evolution is exactly how the medical science indicates, it is by the book. According to the medical studies, the death rate in these patients ranges between 30 and 80 percent, which means that between 3 and 8 patients who have suffered critical burns will die. The risk is now high due to major complications. Anywhere on this planet, the evolution is the same. Nothing more can be done,” said Ioan Lascar, head of the plastic surgery clinic in the Floreasca hospital, quoted by Mediafax newswire.

All 26 people who died right during the fire at Colectiv Club had in their blood toxic doses of carbon monoxide and cyanhydric acid, while in 18 of them the doses were lethal, according to the findings of the National Autopsy Institute (INML).  Many of the substances that were generated by the foam and the burning ceiling in the club also have long-term consequences and risks.

Pro TV journalist and photographer Teodora Maftei, 36, is the latest victim to lose the fight. She died this morning in a hospital in Israel where she was transferred several days ago.

Three of the 5 members of the band Goodbye to Gravity, which was launching a new album during the night of the fire, are dead, while the other two are hospitalized with massive complications. The last victim to die was drummer Bogdan Enache. During transfer to a clinic in Switzerland, he went into cardiac arrest. The aircraft was turned back and, in spite of the fact that doctors performed CPR for 70 minutes, he died right upon arrival at the Bucharest hospital.

Last Thursday, Romanian authorities sent to the European Comnmission a request for transferring approximately 80 patients to other member states. The European Commission is closely watching the health of the victims, according to a statement of Regional Policy Commissioner Corina Cretu.

“I wish to ensure you that at the level of the European Commission, we are watching closely the evolution of their health and we are doing everything in our power to make sure they benefit from the best care and treatment. I have already contacted my colleagues Marianne Thyssen, Employment, Social Affairs, Skills and Labour Mobility and  Vytenis Andriukaitis, Health & Food Safety, to urgently identify the ways in which we can intervene at European level. At the same time, DG SANCO informed the Health and Safety Commission, that reunites the health networks in member states both as far as the situation of the victims in the country is concerned, as well as the need of emergency aid,” said Corina Cretu, Regional Policy commissioner.