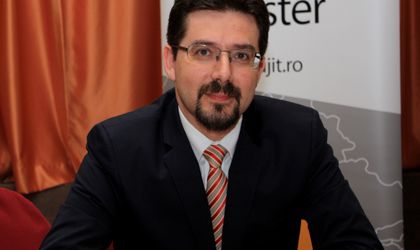 With several dozen projects in progress, Cluj IT Cluster is rooted in collaboration with local authorities, major universities and companies, with the ultimate goal of putting Cluj on the global innovation map. The cluster has obtained European financing for a couple of projects and is in the process of identifying financing sources and taking steps to conduct a pre-feasibility study.

“Cluj-Napoca is a service-oriented city and an important international IT hub, with most companies in Cluj providing services to customers in Western countries. (…) The contact with the West is a result of similarity in mentalities and understanding of demands regarding delivery terms, quality and methodology,” Andrei Kelemen, executive director of Cluj IT Cluster, tells Business Review.

He adds that Cluj has a tradition in IT, saying, “Cluj is already a consecrated brand in IT in the Western world, with more than 78 percent of its products being produced for export.”

Another card that Cluj has up its sleeve is the fact that it is host to major universities that have ties to the business environment. Companies can choose from a wide pool of students. “Out of 400,000 inhabitants, approximately 100,000 are students, well-prepared young people who know foreign languages very well and wish to build a solid career,” Kelemen tells BR.

“Last but not least, the entrepreneurial spirit is in better shape in Cluj-Napoca than in other parts of the country,” he adds.

Currently, Cluj IT Cluster has several dozen projects in various development stages. Kelemen tells BR that as part of Cluj Innovation City alone, there are over 30 proposed projects.

The first pillar around which they are based is research, which includes research centers grouped around strategic domains, innovation centers in life sciences, IT&C, environment and energy, and healthcare, each gathering various institutes.

The second pillar is education, which includes a university campus with laboratories, training rooms, libraries, dorms as well as spaces for pre-university education.

“The Cluj-Napoca City Hall, the Prefect’s Office and the County Council are members of the Cluj IT Cluster and support its projects,” Kelemen tells BR, adding that the cluster has already developed several projects with the support of the local authorities.

One of them is the Hackaton organized in March 2014, as part of Cluj Innovation Days 2014. It had the direct support of the Cluj-Napoca City Hall, which provided the cluster with a set of data that was used in the project. Another joint-collaboration project that is already well-known is Cluj Innovation City, in which all local authorities have joined forces.
Cluj-Napoca City Hall placed a 202 hectare plot at the disposal of Cluj Innovation City. Investors can come and build facilities such as centers, campuses, residences or business compounds. A tender for a four-way road, with all the utilities included, will also take place. The road will link the site to the outskirts of Cluj city and is 8 kilometers from the city center. The budget for the road, which will be 4 kilometers long, has already been set.
“When the investment in infrastructure is done, we will populate it directly with those who give it life and the critical mass of projects that will give it financial sustainability,” Alexandru Tulai, president of the Cluj IT Cluster, told BR in a previous interview.

The involvement of the authorities does not stop here. Three ongoing projects of the Cluj-Napoca City Hall will be part of Cluj Innovation City: the Regional Excellency Center for Creative Industries (CREIC), the Center for Supporting Businesses “Technology, Evolution, Entrepreneurship, Microenterprises in the Cluj Metropolitan Area” (TEAM- ZMC) and the access road from Oasului Street to the Lomb metropolitan area, Kelemen tells BR.

The CREIC will offer companies integrated business services, help desk services, IT consultancy, legal counseling, marketing and sales consultancy. The project is in the execution phase, with 30 percent of the works having already been carried out. Works will be completed in 2015, says Kelemen.

TEAM – ZMC will be a technological park developed for production and micro-production activities, including administrative buildings and production warehouses for SMEs. Approximately 5 hectares of viable land can be placed at the disposal of private investors for future developments. Presently, the TEAM – ZMC center is still in the stage of attributing works, says Kelemen.

As far as the access road is concerned, the Ministry of Regional development and Public Administration is in the process of finding contractors.

In order to take the projects from paper to reality, Cluj IT Cluster is currently identifying various financing sources and preparing the necessary stages for a pre-feasibility study.

The first project, called Innovative Development via the Informatization of the Cluj-Napoca Urban Ecosystem, will support both activities that generate innovative software products produced by companies and universities that are members of the cluster, as well as the organizational development of the cluster.

The main goal of this project is to create a suite of products and services, whose intellectual property rights belong to the companies in the cluster, which will later be used on a large scale.

Also, an important part of the budget of this project will go to the organizational development of the Cluj IT Cluster, with a special focus on the internationalization of the cluster and its members.

The second project was won by the Cluj IT Cluster as partner of the Babes-Bolyai University. According to Kelemen, this project facilitates access to internships at companies and organizations that are members of Cluj IT Cluster for 400 students from the Faculty of Mathematics and Informatics and the Faculty of Economic Sciences and Business Management, part of the Babes-Bolyai University.

“By developing this project, we will give young people the chance to come into direct contact with a successful industry where there are available jobs and salaries that are far above the national average,” Kelemen tells BR.