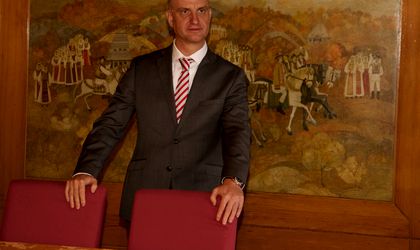 The 1938 historical monument situated in Herastrau Park, Pescarus restaurant, has been taken by the local businessman Dragos Petrescu, CEO of City Grill Group, who promises to reopen the restaurant in May 2015, after a EUR 450.000 facelift. Part of the investment will be deducted from the rent, which is settled to be 9 percent from the revenues.

Pescarus restaurant has almost 400 seats indoor and 600 seats outdoor, on the terrace, which will be completely refurbished in order to be used all seasons.

“The location will maintain its name, which is a powerful brand for those who were living in Bucharest in Communist period, and will be the second Caru’ cu bere”, said Dragos Petrescu in the press conference.

The facelift will bring back part of the interior design that it used to be, revitalizing the ideas of the architect Horia Creanga, the nephew of our national writer Ion Creanga.

The menu will be traditionally Romanian, with contemporary flavors, and will consist of special City Grill tastes, such as the well-known mici.

Currently, the City Grill Group has 16 restaurants and cafes, meaning 4.500 seats, operating Trattoria Buongiorno, City Café, City Grill, Hanu Berarilor and Caru’ cu Bere. Last year, the turnover was EUR 20 million, and Caru’ cu Bere itself made EUR 5.5 million. The group has over 10.000 clients per day, which are served by 900 City Grill employees.