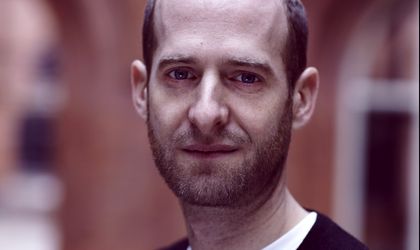 He started his productive career in 2000, as account director for Red Consultancy, then went on to being consumer PR manager for eBay and group account director at Launch Group. Since July 2007 Charlie Coney is leading the creativity at Golin EMEA, by being head of creative. Business Review had the opportunity of meeting and interviewing him during his recent visit to Romania.

Why did you choose this precise moment to come and visit the Golin office in Romania? Was it a special moment?

So, after Cannes in June, I like to spend time travelling around to some of our best offices and I think and I am always surprised not to see more work from Romania doing really well in Cannes. Because I think it’s a really creative market place, the work that is done here is really interesting and I think there is a really big opportunity for campaigns that come out of Romania to do really well in the worldwide advertising stage.

Are you referring only to the PR campaigns or to advertising campaigns in general?

Golin entered 10 works at Cannes this year and we won 3 Lions: one in PR, one in media and one in promo and activation. But now PR agencies are winning in outdoor, in direct, etc. Everybody is doing a little bit of everything, so I think that the original barriers of PR, social, advertising are really blurred these days. Clients don’t want 15 agencies to work with, they just want great ideas executed brilliantly. They don’t care where the idea came from and that’s why agencies like Golin, who originally do PR now offer broader services.

So do you think that in the future we will not be talking about separate agencies any more (PR, advertising, media, etc)?

Advertising agencies right now do PR, digital, etc. PR agencies do now paid media, for instance. In the future I believe there will be communication agencies. I kind of think of Golin as an agency for the future. We don’t really think about channel or content, we think about how we make the client more relevant to the audience he wants to talk to, and the execution and the expertise come after that. It’s always about the idea first and then the channel, the piece of content that supports it. So I would imagine that everybody would be moving towards a more “full-service” offering.

In this context, do you believe that the competition will be even harder than before? Considering that every agency or team that has an idea will be pitching to the same client?

The competition will be bigger, but the opportunities will be greater too, because I think that the clients don’t care where the Big Idea comes from: if it comes from a shopper marketing team, from the digital agency or the advertising agency. They just want the best idea. So you just need to make sure that your agency is set up to have the right kind of data, analytics and insights, the frontend, the best idea in the middle and the best team and people to take that content out through media buys, through Facebook targeting, through promoted Tweets or traditional PR ( press releases). You have to offer something different and unique. We like to think that relevance is really important, because at the end of the day if you are thinking about the number of times that you are targeted by brands and companies (thousands and thousands of times), that you ignore – 99 percent of them – we need to work hard to make sure that our clients are that 1 percent that cuts though. And that requires quite a lot of research, data, thinking and a brilliant idea in the middle of it.

So I think that this is what creativity and PR is these days – the ability to find out something unique about the audience, find a really compelling way to reach them and come up with a brilliant idea and that is where I think that the opportunities really lay.

It means you consider data and research as being really important these days, no?

People often said to me “data is the enemy of creativity”, but I don’t think that is the case at all. I believe that creativity and insights and analytics and data are a wonderful tool. I was talking earlier to some of the teams here that you can test ideas very quickly these days, you can put stuff into the field and get a response very quickly. Actually, data provides a really good way of validating the creative, but also informing where the creative needs to play.

How hard is it to actually be creative these days with all the information and the technology bombarding you at every step of the way, but also with so many things already done?

A lot of people say that there is no such thing as a new idea, I probably agree, but I think that there are ways of taking, tweaking, improving, putting together two things that people haven’t considered before. That is what creativity really is: simply the joining together of two things in order to create something new. Therefore, I think there is a lot more competition, the market place is a lot more crowded, I think it is harder and that’s why you have to think in a less traditional way to make sure that your ideas are the best. So, when I hear that the guys here have a creative hub featuring people form 5-6 different agencies, working together I think it’s simply brilliant. What better way to talk about finding disruptive ideas and bring together people from different disciplines?

We have a tool that we call The Bright Collective and I look at creative teams at our offices at around the world and from other agencies around the world and they are all very similar. They all wear t-shirts, trainers, have beards, eat at the same restaurants. There is not a lot of diversity in the creative world. This is one of the main reasons that we created the platform the Bright Collective that has 500-600 creative people from around the world (chefs, architects, film producers, fashion designers, creatives from advertising background, digital creatives) and we put our briefs on this platform, that is closed, it’s confidential and we get all this input from around the world and the person that is closer to the client gets all this ideas and is constantly amazed by them. This is the way you get something new and refreshing.

Technology has made creativity harder, but has also made it easier, because you can break down boundaries, bring teams together. I can have a brainstorming session with a guy from New York and with one from Bucharest and Johannesburg at the same time. The opportunity right now is tapping into all these different areas and bring that together to create something new and really inspiring.

You were talking earlier about the Hub. How are the people there connected and willing to share ideas and not afraid someone may steal them? How did you convince them to do it just for the sake of the idea and the concept of the campaign?

It’s definitely a challenge, but I think that you need to have faith in the account teams, in the relationships that you built with your clients over long periods of time. Creatives can sometimes be protective, but in the world that we live in right now, in this sharing economy, with Facebook that has open so many ways of communication and paths, the fact that there is very little secrecy left due to our willingness to share with everyone, I think, hopefully, that this is becoming less important and less of an issue from the production of an idea point of view.

Everybody rotates in the industry and if you behave badly with an agency, it’s karmic, sooner or later it will come back to you, people will understand that you have to work in a certain way.