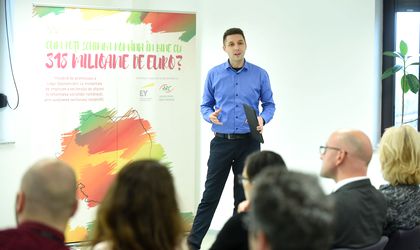 In 2014, only 21 percent of Romanian companies registering profits used the “20 percent law”, the so-called sponsorship law, to redirect funds towards non-governmental organizations (NGOs), according to data from the national fiscal authority ANAF. The number of companies that know about this scheme has gone up in recent years, yet many continue to be reluctant to make use of it, according to NGO representatives.

The Sponsorship Law no. 32/1994 entered into force in Romania 21 years ago and allows companies to redirect, at no additional cost to themselves, up to 20 percent of the income tax towards NGOs, with a further ceiling of no more than 0.3 percent of their annual turnover, this latter constraint about to change starting with 2016.

At the moment, the funds redirected are limited to no more than 0.3 percent of the companies’ turnover in the given fiscal year. Next year the ceiling is meant to increase to 0.5 percent, “which will allow for a significant increase in the sums that can be redirected towards NGOs”, according to Mihaela Vasilescu, fiscal assistance manager with EY Romania. Moreover, the current Fiscal Code provides for the possibility to carry forward the sponsorship expenses eligible for fiscal credit on a yearly basis for seven years. “This provision, already in force, practically gives the sponsor the possibility to get back, based on the fiscal credit, the entire sum awarded as sponsorship even if he did not obtain a profit in that given fiscal year”, further added Vasilescu during a conference organized by HOSPICE Casa Sperantei, partnered with EY Romania and Asociatia pentru Relatii Comunitare (ARC), as part of a campaign to raise funds for NGOs from the corporate sector.

As discussed last week in regards to what NGOs could do with the potential RON 1.4 billion (EUR 318 million) that could be allocated for sponsorships, patronage or private bursaries if all companies were to use the sponsorship law, the number would further increase under the new 0.5 ceiling. “We calculated that if in 2014, with the numbers from that year, we would’ve had a 0.5 percent ceiling instead of 0.3 percent, the potential would’ve increased by 27 percent”, said Laszlo Bodor, communication and fundraising director for HOSPICE Casa Sperantei, local NGO providing palliative care to terminally ill patients.

Also during last week’s conference, HOSPICE Casa Sperantei, EY Romania and ARC presented the findings of their How do NGOs and SMEs see the sponsorship law? survey. Their research centers on the changes in perception that NGOs and SMEs have gone through since last year both in terms of their growing awareness of the law, their use or lack of use of it, and also their reasons for either using (SMEs) or not using the law (NGOs).

Of the participating SMEs, 87 percent said that they were aware of the law’s existence while 13 percent were not. When asked about the means through which they found out about this fiscal option, 39 percent of respondents said that it was through the financial-accounting department of their firm or the accounting firm they work with, a change from 2014 when 60 percent gave the same answer. The percentages for those who found out from the media or NGOs rose significantly, to 35 percent from 25 percent for the former and to 26 percent from 15 percent for the latter. “When it comes to SMEs, the NGOs’ initiative to communicate about this possibility has brought results”, said Elena Badea, EY Romania Head of Market Enablement.

According to the survey, 52 percent of respondents allotted funds towards NGOs using this mechanism in the 2014 fiscal year, 31 percent didn’t, and 16 percent answered “I don’t know”. The 48 percent that responded negatively or were unsure is an area of potential, where “there’s still work to be done”, added Badea. As for the reasons for the SMEs’ use of the “20 percent law”, the survey showed that the majority cited either a sense of social responsibility or a desire to help (33 percent for the former, 25 percent for the latter).

When asked about whether they were approached by NGOs who asked for support through this fiscal mechanism, there was a decrease in the amount of responding SMEs that said yes in 2015 (71 percent) as opposed to 2014 (91 percent). A possible reason for this could be that companies are interested in establishing a recurring relationship with an NGO of their choosing, speculated Vasilescu.

The survey also looked at the main barriers to accessing the “20 percent” opportunity for NGOs. Testaments from the respondents pointed to the lack of relevant information, the lack of human resources to deal with it, an inability to find companies willing to accept the use of the “20 percent” mechanism, the latter appearing to be related to the small size or relative new entry on the market of an NGO, according to the survey. “Looking at the text, we notice limiting convictions”, observed Badea, adding that “a part of potential to be unblocked can be found at the team level in the NGOs”.

The main means through which NGOs tried to convince companies to make use of the “20 percent” mechanism, according to the survey, was through common friends and acquaintances (76 of respondents), direct contact (75 respondents), followed by phone contact (66 respondents) and the use of electronic mail (65 respondents).

The person most often mentioned to be the one in charge of promoting the “20 percent law” is the president, with 38 percent reporting this in 2015 as opposed to 36 percent in 2014, followed by the executive director (22 percent as opposed to 26 percent) and a fundraiser officer (an increase of 1 percent from 2014 when it was 24 percent).

The survey also looked at how the NGOs’ interest in the 20 percent law has changed, with 53 percent of respondents saying that it has increased in 2015, compared to 2014 when the same amount said that it hadn’t changed. Moreover, the NGOs were asked whether they would consider that collective actions on behalf of more Romanian NGOs would be efficient in drawing attention towards the “20 percent law”, and 92 percent responded favorably.

The How do NGOs and SMEs see the sponsorship law? survey was carried out between October 20 and November 20, 2015, with a sample of 75 SME representatives and 110 NGO representatives.