Changing the flat tax would be a mistake, warn British investors 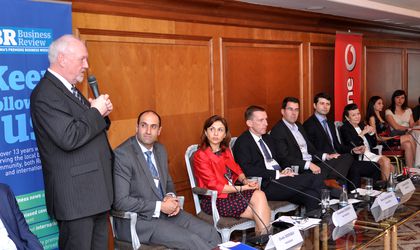 Simplifying employment legislation, depoliticizing the public administration, developing the infrastructure, encouraging meritocracy in the civil service and the more assiduous application of the law are the main changes UK firms would like to see implemented in order to improve the local business environment, agreed company representatives present at the third British Investors Forum organized by Business Review last week.

No large British investor left the Romanian market in 2011, despite the fact that it was a hard year for all companies regardless of their nationality. However, some firms have had it worse than others. The easy availability of credit during the boom time which led to an inflation of asset value and a lot of speculative development spelt the end for many companies in the real estate sector, said Gerry Eastwood, director at H&J Martin, the local subsidiary of a British construction company. And prospects are looking no brighter while lenders don’t resume financing. “Banks say their doors are open for business but the reality is that there aren’t a lot of funds available and that is hindering development,” he argued.

And while no major British companies have left the local market this doesn’t mean that some of them didn’t wish to, but chose to remain because of previously made investments in local assets, pointed out Victor-Dan Papala, senior manager at Baker Tilly.
Another topic tackled by attendees was the pros and cons of the local workforce, in particular what some described as the lack of loyalty of Romanian employees. Many companies complain about this issue and are reluctant to invest in employee development when the loyalty of their workers is so low that they are ready to leave the company if given an additional EUR 100 elsewhere, said Raymond Breden, executive chairman of the British Romanian Chamber of Commerce (BRCC) and the event’s moderator.

Angus Slater, chief marketing officer at Vodafone Romania, agreed that lack of staff loyalty has been a problem. He suggested the solution lay in making the basis of comparison between one’s company and its competitors about more than money. “We have tried to invest in training and build career paths for our people. (…) You need to offer a meritocratic system which gives them the opportunity to develop career paths,” he said, adding that this is not necessarily the prerogative only of large multinational companies. Career advancement can often be easier to achieve at smaller firms, he added.

EU membership – worth the wait?
Attendees also debated the benefits brought about by Romania’s EU accession, given that five years later the country has attracted only about 15 percent of the allocated funds while at the same time faces the rigors of being an EU member.
The accession was overall beneficial and Romania can still turn the situation further to its favor, it was posited. Proof of this is that the Romanian economy has grown considerably since the accession despite the crisis, argued Ovais Siddiqui, finance manager of Provident Romania.

“I think joining the EU was like the fall of communism. There were Technicolor expectations that everything would change overnight. This was unlikely to happen and I think that if we look at the accession process, and again the process is part of the story, it made us progress in a number of sectors; it forced us to improve and amend many, many things in order to join the EU. And I think we shouldn’t look just at the benefits for Romania but the multiple benefits for all of Europe,” said Princess Marina Sturdza, patron of the BRCC.

One should be careful about criticizing Romania for not changing rapidly because in Western Europe, and Britain in particular, people object to some EU rules being imposed, stressed Breden.

Stability, stability and again stability
Asked what changes they would make if they were prime minister, panelists said simplifying employment legislation, removing politics from and encouraging meritocracy in the public administration, developing infrastructure and applying the law more rigorously would be at the top of the list.

And while red tape continues to remain an issue in Romania, the lack of stability is probably more problematic, they argued.
This is an issue especially in the case of capital-intensive businesses. “A certain degree of certainty is necessary when talking about large investments,” stressed Slater.

“I probably spent the last ten and a half years learning to deal with the red tape as it is. If it is stable, than I can deal with it. If it is constantly changing than we constantly have to relearn the bureaucracy and that is substantially more difficult,” pointed out Eastwood.

The same applies when it comes to fiscal changes. Asked their opinion on the possible abolition of the 16 percent flat tax and the return to a progressive taxation system, panelists largely argued that the change would not be beneficial – not  only because of a possible hike in taxes, but, again, because of the way it would affect stability. The measure would also significantly reduce Romania’s attractiveness in the region, warned Papala.

Regardless of the effects, Florentina Susnea, GM of PKF Finconta, said it was unlikely any such major fiscal changes will be made over the next six months.

The British give back
The changing perception of CSR was also discussed at the event. Romania has always been a country with a strong civil conscience, thinks Princess Sturdza, and after communism destroyed much of this, Romanians are now rediscovering core values.
“My personal view is that CSR is actually moving towards the commercial center of a business,” said Slater, telling attendees that for Vodafone, being a responsible company is becoming more integral to the company’s commercial strategy thorough the products and services it sells and not only the through the money donated.