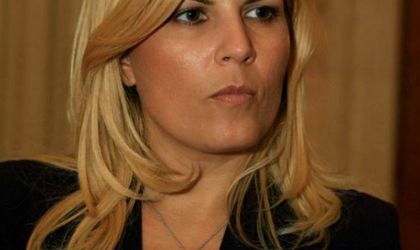 Following the arrest approval, the PMP (People’s Movement Part) MP was subpoenaed by prosecutors on Tuesday morning to go to the National Anticorruption Directorate (DNA) related to the “Gala Bute” and “Microsoft” files in which she is charged with corruption, according to judicial sources quoted by Mediafax.

Six requests of the DNA concerning Udrea passed the plenum vote — three approvals of criminal investigations and the corresponding permissions to take her into custody.

One of the cases involving Udrea is the so-called “Microsoft file” on the public acquisition of software licenses. She is also charged of one count of accepting bribery in the “Bute Gala”, a boxing event organized by the Tourism Ministry in 2012 when it was headed by Udrea. According to DNA, there are suspicions that the Tourism Ministry used alleged illegal funds from its budget coming from EU funding during 2010-2012 for the above-mentioned event.

Finally, DNA had asked to replace Udrea’s release under judiciary control, decided on January 29, with the preventive arrest, also in the Microsoft case.

MP Elena Udrea commented the Parliament missed “an opportunity” by voting to approve her investigation and arrest. She claimed she assumed her destiny.

“The topic should not be my fate, but how Romania will look ruled from the shadow, in a discretionary and occult way, once truth is suppressed,” Udrea wrote on her Facebook page.

Elena Udrea was expected to go at the DNA headquarters on Tuesday at 11 am.