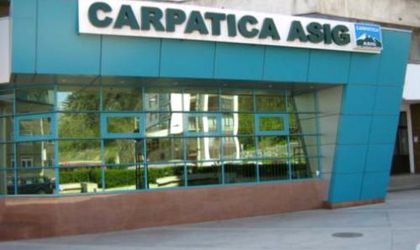 Carpatica Asig underwrote gross premiums of RON 257.26 million in the first six months, down by 15.7 percent over the same period last year, announced the company. This was in line with expectations, driven by adjustments made to risk and sales policies.

On the other hand the average premium increased on the motor third party liability (RCA) segment from RON 557 per policy to RON 608 per policy.

The company, part of the Carpatica financial group controlled by Ilie Carabulea, paid compensation for 28,563 claims during the first semester, worth RON 185 million, 4 percent more than the same period last year, when it paid RON 177.5 million.

The highest compensation amounted to RON 2.1 million, for a RCA claim file, which was solved in about two months.

Carpatica paid RON 164.5 million for damages related to insurance policies on compulsory motor liability, of which RON 25.1 million represent payments for injuries and damages, 14 percent of total claims paid on the RCA segment.

Carpatica Asig concluded this year a comprehensive reinsurance plan for all lines of insurance they practice.

“All our efforts are directed towards constant improvement and efficiency of the services we offer, especially those who support the settlement of claims,” Carpatica general manager Liviu Stoicescu said.

The Sibiu insurer has an ongoing recovery plan approved by the Financial Supervisory Authority (ASF) in September last year, valid until the end of the year.

The company situation worsened after Ilie Carabulea, who holds control of Carpatica Asig, and Marian Mirzac, former general manager of the company, have been in temporary custody for corruption charges in January 2014. The two were accused of fraudulently delaying and to influencing the results of inspections ordered by ASF to the insurance company between May and December 2013.

In the year assessment of assets and liabilities and stress tests Carpatica Asig showed negative equity of about RON 410.3 million, following RON 290.7 million adjustments by the auditor.

Following the results, Carpatica added measures to complement the recovery plan, approved by the financial authority.

The company has pledged to pay up to the end of August shareholders subscribed capital of RON 2.5 million, to collect starting September insurer divested shares of RON 2.7 million, and to attract a subordinated loan of at least RON 30 million.

Furthermore, the company wants to shorten the period of attracting a strategic investor in order to complete the transaction before December 15.

Carpatica Asig began operations in 1996 under the name of ASA Asigurari Atlassib, changing to its current name in 2004. The company has over 60 units and works with some 5,000 intermediaries.