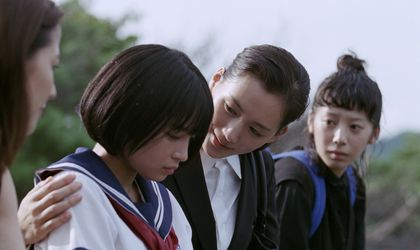 Dozens of films showing for the first time in Romania, over 100 screenings, some of them with the filmmakers in attendance, as well as master-classes, round tables, retrospectives and other special events are available to the public between 23 – 29 October at Studio Cinema, Elvira Popescu Cinema and CinemaPRO during Les Films de Cannes à Bucarest.

Twelve of the award-winning films of Cannes may be enjoyed for the first time in Romania at Les Films de Cannes à Bucarest. The Palme d’Or winner and the recipients of the prizes for Best Director, Best Script, Best Actor, Best Actress, Camera d’Or and Un Certain Regard will take some of the excitement and enthusiasm that Cannes generates and instil it right here in Bucharest.

Widely considered the front-runner in the Palme d’Or race, The Assassin ended up taking home the Award for Best Director at Cannes and was Taiwan’s entry to the 2016 Oscars. Taiwanese master Hou Hsiao-Hsien presents a beautiful exploration of the history of martial arts, highly acclaimed by the international press.

The Lobster, by Yorgos Lanthimos, winner of three prizes at Cannes: the Jury Prize, a Queer Palm Special Mention – an award for LGBT-relevant films; and the second place Palm Dog – for most charismatic dog, will also be screened. The critics spotted traces of Luis Buñuel and Eugène Ionesco in this bizarre and humorous satire, set in a future dystopia in which single humans are forced to fall in love in 45 days or else they transform into an animal of their choice.

The Mexican writer-director Michel Franco (After Lucia) was certainly right to cast Tim Roth in the starring role in Chronic, winner of the Best Script Award. He is excellent as David, a homecare nurse for the terminally ill, a man of few words who lets his sadness and repressed pain completely engulf his personality. A tough and honest film about loneliness and suffering that has drawn comparisons to Michael Haneke’s Amour.

The Measure of a Man, directed by Stéphane Brizé, has brought the Cannes Award for Best Actor to the well-known French actor Vincent Lindon, the most recent highlight of his lengthy career spanning over three decades.

Matteo Garrone, who already has two Grand Jury Prizes to his name, for Gomorra (2008) and Reality (2012), returned to the Cannes competition with Tale of Tales, an adaptation of the world’s first printed fairy tale collection, Pentamerone by Giambattista Basile, published in 1600. An outlandish fantasy world, reigned over by kings, princesses, witches, spirits and ogres, in which Salma Hayek, Vincent Cassel, Toby Jones and John C. Reilly have the starring roles.

The Norwegian director Joachim Trier brings together big names such as Jesse Eisenberg, Gabriel Byrne, Isabelle Huppert, David Strathairn and Amy Ryan for Louder than Bombs. The intense and emotional drama of a father and his two sons that have to face their memories, but also their secrets from the past, when they reunite in the family home, three years after losing his wife, their mother, a famous war photographer.

We remind you that also making the journey from the Cannes’ official competition to Bucharest are films such as Dheepan, Palme d’Or winner, Mon roi, the film that brought the Award for Best Actress to Emmanuelle Bercot, special guest in Bucharest, Our Little Sister, Mountains May Depart and Sicario.

Three of the films awarded the Un Certain Regard trophies will be screened for the first time in Romania: The High Sun (Jury Prize), Journey to the Shore (Award for Best Director) and Masaan (Special Prize for Promising Future).

Audiences will also have the opportunity to (re)watch The Treasure, Corneliu Porumboiu’s film awarded the Un Certain Talent prize, shared by the entire cast, in the same section. Unmissable, also from the Un Certain Regard section, is the film One Floor Below by Radu Muntean, highly praised in the international press and drawing comparisons, in terms of story and methods of building tension, with Rear Window, by Alfred Hitchcock.

France and Belgium’s entries for the 2016 Oscars, a marathon film of 338 minutes inspired by “One Thousand and One Nights” and the winner of the Camera d’Or award at the Cannes Film Festival are additional surprises for the sixth edition of Les Films de Cannes à Bucarest.

DMCA
PROTECTED
Tags: cinemapro, Dheepan, Elvira Popescu Cinema, Journey to the Shore, Les Films de Cannes a Bucarest, Louder than Bombs, Masaan, Mon roi, Mountains May Depart, One Floor Below, Our Little Sister, Sicario, studio cinema, Tale of Tales, The Assassin, The High Sun, The Lobster, The Measure of a Man, The Treasure