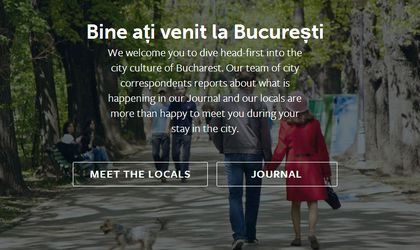 Citinerary is an initiative that intends to meet and greet a local with a tourist, after the tourist has announced what are his/her interests regarding the city. The local will then prepare a map and a list of selected locations, according to the information provided.

“Bucharest, you are just like a jigsaw puzzle with no corner pieces. All the pieces are different, yet, for some reason, they all stick together. Your architecture lets me time-travel from Little Paris, full of poetry, that you once were, to somber communism which left its trace full of opulence. Yet, when I look at you, I can see today. A mixture that I love and that I think makes you so special. The vibe, the people… You smile, and your people smile, and you make me smile for being yours. You are not Bucharest. I’d say you’re rather restless, at least to me, you’re Bucharestless. You’re full of life and there’s no way to think that a night with you would not be fun. And in the morning, dizzy from the loud music and all the dancing, I will walk home in all your greenness. And smile again” uses as argument Ioana Negulescu, the initiator of the project in Romania.

The initiative already exists in Amsterdam, Oslo and Rotterdam and was taken by Robin Cox. They started in Amsterdam at the end of 2012 from the observation that many tourists/ visitors are rather clueless of what to explore during their stay. Within this initiative, they tried to answer the questions where are the parties, what food should I eat and which neighborhoods do locals normally go to, offering a change to a city experience.

Four reasons to come to Bucharest, according to Ioana Negulescu

Take a stroll in Bucharest and you will probably feel like you’ve visited not one, but a couple of cities. In a same spot, you will travel in time a couple of times. A bit of the late 19th, beginning of the 20th Century, majestic buildings, large boulevards filled with trees and roundabouts with flowers. A bit of what communism left upon us – gray blocks and an intense taste of megalomania. And in between all that, you’ll get a feel of today, of a society that is developing faster and faster. You will see faces with traces of hard times, and you’ll see the younger generation striving for more. With an optimistic spirit and positive thinking, they are the generation who will make a change.

Bucharest is a city made by people. Because without the people, you would barely be able to get an impression of the city. In Bucharest people are friendly and humble, and the smile of their face grows bigger and bigger when talking to a foreigner. In my opinion, visiting Bucharest without interacting with its locals would reduce your overall experience by half. They will show you around, recommend you all the good places, and sometimes, they’ll even invite you over for a barbeque or a drink.

From concerts to urban events, organised bike tours and underground parties in the most exciting locations, you will always find something to do in Bucharest.

The night is always young

Meet a local? They’ll surely let you know where all the good parties are. Because Bucharest without its nightlife would not be the same! If you’re in town, make sure to check out all the nice clubs – cheap drinks, no entry fee and make sure to stay until the end – for some it’s the end of a successful night, for others it will just be a very early morning…