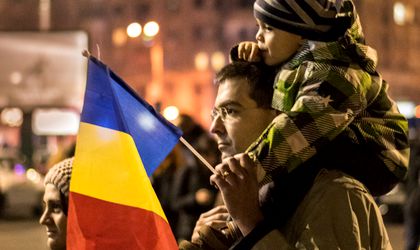 UPDATE: Some 35,000 protesters were estimated to have taken over downtown Bucharest on Wednesday evening, according to local media reports. The demonstrations were peaceful, with people asking for a deep reform of the political system in addition to the resignations announced earlier on Wednesday.

The crowd held a moment of silence for the victims of the Colectiv fire, kneeling in the square. Part of the people left for the government afterwards, with the majority staying behind chanting “We won’t leave”. Some of the participants received a copy of the Colectiv newspaper, containing a text by Adrian Rugina, one of the fire victims. Rugina was a drummer for the Bucium band, and had written a text about the necessity of the youth becoming politically active on November 16 2014, during the second round of presidential elections.

This is the second day people gather in the center of the capital city,after some 25,000 marched on Tuesday evening, asking for prime minister Victor Ponta, minister of internal affairs Gabriel Oprea and district 4 mayor Cristian Popescu Piedone to resign.

Social networks announce that a new protest is announced for Wednesday evening at University Square, with more than 11,000 hitting the “Going” button on a Facebook event.

People joining the protest believe a technocrat government would be a valid option until elections, with over 1,000 people voting for this option on a poll. Another popular demand in the poll is the unblocking of all criminal investigations concerning MPs, with over 1,600 votes.

Prime minister Victor Ponta resigned this morning, bringing the automatic resignation of Gabriel Oprea, along with the government dissolution. Cristian Piedone has also stepped down.

At 18:30, approximately 1,000 people were already present in the square, protesting peacefully. Candles were lit near pictures of the people deceased in the Colectiv fire.

People have also announced they were taking to the streets in Craiova, Brasov, Constanta, Calarasi, Targoviste, Alba Iulia, Ploiesti, Bacau, Botosani, Cluj and Sibiu, but also London and Paris, according to Hotnews.