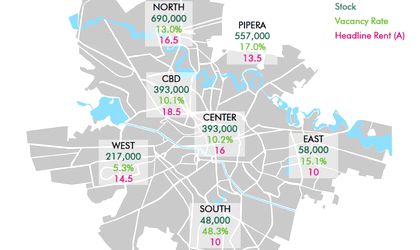 Total leasing activity on the Bucharest office market reached 72,000 sqm in Q3 2015, according to data released by CBRE. Of these, take-up represented 47 percent, while new demand made up 30 percent.

The Pipera (41 percent) and North (32 percent) sub-markets were most active, attracting 73 percent of the total office leases. The Central sub-market had a 12 percent share of leases, while CBD and West had 6 percent each and the South sub-market held a 3 percent share.

The IT sector took up almost half of the office spaces leased during this period, with a share of 48 percent.

Prime rent and prime yield were stable at EUR 18.5 smq/mth and 7.5 percent, respectively.