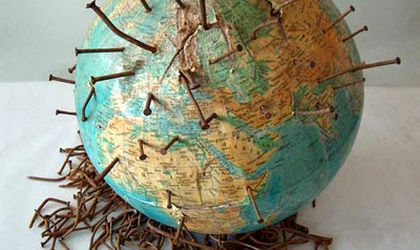 Expose Practice is a weekly series of talks in Pavilion – center for contemporary art and culture by the artists which are participants in Bucharest Biennale 6 and present in Bucharest. The talks invite the speakers to discuss their practice, research methodologies and thinking in an informal setting. The series is generated by the curator of Bucharest Biennale 6, Gergő Horváth, and the first guest is Marilena Preda-Sânc.

Marilena Preda-Sânc is part of the 1980’s generation of artists. She is considered one of the first representatives of the feminism in the contemporary art in Romania. She graduated from the Institute of Fine Arts “Nicolae Grigorescu” in 1979. She has a PHD. in Visual Arts and, from 2008, she is a professor at the National University of Arts, Bucharest and President of Bucharest Painting Department of Romanian Fine Artists’ Union. Other positions held are: Editor in Chief – Contrapunct Magazine; Member of AICA (International Association of Art Critics); Founding Member of ARFA (Romanian Association of Women in the Arts); Coordinator of BA and MA projects of Public Art.

Bucharest Biennale 6 is held until July 24 using the concept Apprehension. Understanding Through Fear of Understanding and curator Gergő Horváth explains that “fear is induced through certain events, by the people around us, through their actions and knowledge, be it warranted or not, conscious or unconscious.”