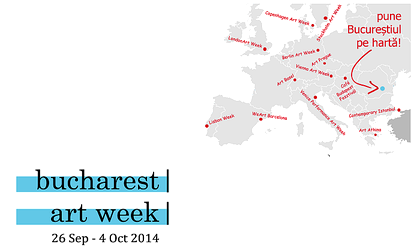 The firs edition of Bucharest Art will take place from 26 September to 4 October 2014 under the theme „Cities, borders and attitudes”. The art week will be structured around the need of experiment and cultural exchange between artists from European countries, especially from central and eastern Europe.

Each edition will approach a theme of social interest and starting with 2015 will have a Romanian or international curator invited to set the theme, to sign the central exhibition project and to select the projects proposed by the artists, galleries, organizations and independent curators together with the other members of the jury.

This year’s edition will involve a series of artistic events organised in public space counterbalanced with art expos, open workshops, artist talks and auxiliary events in galleries, alternative spaces and cultural centers. The organizers are aiming for an audience of 50,000 people.

Vodafone Romania launches ”Together we are stronger”, a platform for live artistic performances