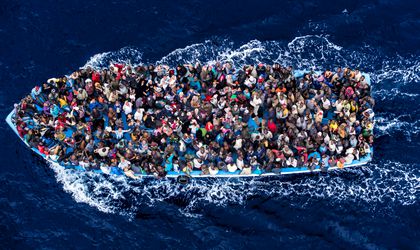 During a vote concerning the distribution of 120,000 refugees across the EU bloc, the measure to impose migrant quotas on member states has been approved, Reuters announced. Usually a vote that required unanimity, this time the rule was changed to a majority.

This has caused a rift between western and eastern countries, as migrant quotas are in some cases fourfold the initial proposed numbers, some eastern countries arguing they cannot support such high numbers. The European Commission, the EU executive, had proposed the scheme with the backing of Germany and other big powers, while he interior ministers of the Czech Republic, Slovakia, Romania and Hungary voted against the plan at a meeting in Brussels, with Finland abstaining.

According to the initial proposal, 4,646 people would have been added to Romania’s distribution list, bringing Romania to a total of 6,351 migrants from the 1,780 initially proposed. However, following the news discussions and the decision to impose mandatory quotas, Romania will receive a total of 4,837 refugees.

Refugees and migrants arriving in Greece and Italy have been streaming north to reach more affluent nations such as Germany, prompting countries in central and eastern Europe alternately to try to block the flow or shunt it on to their neighbours. Hungary has stretched a fence along its borders, stating it was protecting the country’s integrity but also Europe, while suffering reprove from most EU states. However, as numbers started to rise, borders started to close one after the other, sparking disputes over border controls as well as bitter recriminations over how to share out responsibility.

French President Francois Hollande said there would be consequences for countries that refused to implement the request. Governments can be fined by EU courts for failing to implement EU law, and ministers in some wealthier, western states have also warned that they could reduce future subsidies to poorer neighbours that do not show “solidarity” in the refugee crisis.

“The sanctions exist,” Hollande told the French TV station BFMTV from London. “So these countries will be putting themselves in a situation where what they are receiving from Europe could be suspended. You cannot ask Europe for support and refuse when Europe asks for solidarity.”

Spokeswoman Melissa Fleming said  the measure should be coupled with bringing more support to Greece and Italy in receiving and assisting large numbers of migrants, while helping distribute 50,400 asylum-seekers from Greece and 15,600 from Italy to other member states. Because Hungary refused to take part in the relocation scheme, the remaining quota of 54,000 asylum-seekers who would have been moved from Hungary will instead be relocated in the first instance from Italy and Greece, after the first year.

The Organisation for Economic Co-operation and Development said Europe could expect a record one million people to request asylum this year, and almost half would probably qualify to be taken in. At the moment the migrant quotas are calculated to distribute 160,000 refugees arriving in Europe since the crisis has started.

Asked whether Romania has the money to receive a larger number of refugees, prime minister Victor Ponta said “it’s not a matter of money.”

“The problem lays in our logistical capacity and in the possibility to integrate them into society. I don’t believe that the idea is to take some people in and keep them locked somewhere, because this is not how things are done. The idea is to try to offer them a way of life until they are capable to return to their own countries. Which today, as we speak, we lack such experience.”