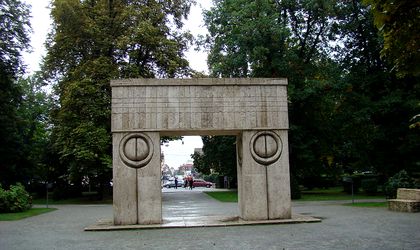 The National Heritage Institute will allocate RON 370.000 to restore one of the pieces of the Sculptural Ensemble of Constantin Brâncuși at Târgu Jiu. According to the official press release, the sculptures could go on the UNESCO world heritage list in 2015.

The restoration consists of replacing existing lead sheet, applying a bituminous coating, cleaning the stones and waterproofing. The complete explanations for how the restoration is made can be found here. The complete facelift will be ready on October 10.

The Sculptural Ensemble of Constantin Brâncuși at Târgu Jiu is an homage to the Romanian heroes of the First World War. The ensemble comprises three sculptures: the Table of Silence, the Gate of the Kiss and the Column of the Infinite, on an axis 1,300 m long, oriented west to east. The Ensemble is considered to be one of the great works of 20th century outdoor sculpture.

The monument was commissioned by the National League of Gorj Women to honor those soldiers who had defended Târgu Jiu in 1916 from the forces of the Central Powers. Constantin Brâncuși was at the time living in Paris, but welcomed the opportunity to create a large commemorative sculpture in his homeland. He accepted the commission in 1935, but refused to receive payment for it.

“Brâncuşi’s dreamed of sculpting through all the subsequent significations to their fundamental core. The capacity was in his blood and articulated the lonely, exultant years he spent as a youthful shepherd as well as the isolated latter part of his life. But if, in some Modernist project, he could strip down matter until it revealed its form beyond the trappings of technology, it was because his fellow peasants were doing it just that same way for thousands of years”. – fragment from “The Romanian: Story of an Obsession”, a memoir by Bruce Benderson.

DMCA
PROTECTED
Tags: Brancusi’s “The Gate of The Kiss”, Bruce Benderson, National Heritage Institute, Sculptural Ensemble of Constantin Brâncuși, the Column of the Infinite, The Gate of The Kiss, the National League of Gorj Women, The Romanian: Story of an Obsession, the Table of Silence