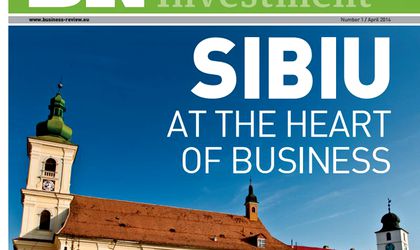 Is there business outside Bucharest? There certainly is – and to ﬁnd out where to invest and what the economy looks like outside the capital, BR is launching a series of supplements dedicated to the main development poles around the country. The ﬁrst issue focuses on Sibiu County.

A strategic position in the heart of Romania, good infrastructure access, a skilled workforce, support from the authorities, a different business culture from Bucharest and the local quality of life have persuaded companies active in various industries to invest in Sibiu.

“In 2003 Continental was looking to extend its business in Romania with a new electronics factory. Sibiu was a good option logistically and for its access to the European highway network – most of our clients are in southern Germany. The airport was also a big plus as was the Lucian Blaga University, with whom we have worked very well since the first year,” representatives of Continental Automotive Systems told BR.

So important is the investment that the German automotive manufacturer’s plant has grown to become the largest business in the county based on turnover in 2012, according to the National Trade Register Office.

And Continental is not the only manufacturer that has found Sibiu to its liking. German companies in particular have come and now represent the largest foreign investor community in the county. Automotive manufacturer Marquardt Schaltsysteme has built its largest production facilities outside Germany in Sibiu, according to local media. The region is also home to Takata Sibiu, Kuhnke Production, Thyssenkrupp Bilstein Compa, Harting Romania Manufacturing, Brandl Ro, Austrian Frauenthal Automotive Sibiu and numerous smaller investors.

They were attracted by the strategic location, local infrastructure and skilled workforce as well as the county’s strong German background. The authorities too have played a role. “We chose Sibiu out of several cities also because from the beginning we had the feeling that we were in good hands, with the local administration offering all the necessary support,” added Continental representatives. The company employs more than 2,700 people in Sibiu out of whom 760 are engineers who work both in production and in its local R&D center. The manufacturer plans to further expand its operations in Sibiu by adding a new production module and a new R&D building and hiring more people. Continental has other production and R&D facilities in Timisoara, Carei, Arad and Iasi.

But it is not only industrial players who find Sibiu attractive. Management and technology consulting firm BearingPoint opened its only office outside Bucharest in Sibiu. “It is located in the middle of the country near major university centers such as Cluj, Timisoara, Brasov and of course Sibiu. Transylvania offers very good potential job candidates. Also, in 2007 Sibiu was European Cultural Capital and there is the airport in Sibiu (…). This was very important for us because our consultants travel a lot to our Western European clients,” Christian Gurny, partner with BearingPoint Romania, told BR.

He believes Sibiu even rivals Bucharest for companies who come to Romania for the first time or investors who want to expand their local activities. “Absolutely yes! I think Sibiu is a very good alternative due to a pool of candidates who are well educated, graduates of economics and technical faculties who speak several foreign languages fluently. As a consulting firm, our most important asset is our people, which is why it’s very important to find the most talented and cleverest minds. Also, the cost of living is lower in Sibiu than in Bucharest. Besides all this, there are many interesting prospects from various industries, including automotive producers that have subsidiaries and production units close by,” he outlined. The company employs 42 consultants in Sibiu and wants to increase the headcount by half again by the end of 2014.

Sibiu has emerged as an office destination due to the large manufacturers of automotive components that have invested here, but it could also attract more SSCs (shared service centers) and BPOs (business process outsourcing), positioning it as an alternative to Cluj, Gijs Klomp, managing director and head of capital markets at JLL Romania, told BR. One downside is that the city is relatively small and so lacks the critical mass of workers, he believes. Overall, there is a need for Class A offices in Sibiu as the local office market is still poorly represented. The existing demand is far from being met and finding an appropriate office space is a challenge, he said.

One outsourcing company that has invested in Sibiu is American CGS which opened a support center here in 2011, in addition to ones in Bucharest and Brasov. It has close to 350 employees in Sibiu since advertising 150 new positions at the beginning of the year.

“The quality of the workforce and their training and education – in terms of languages but also technical and communication skills – are key criteria for us when choosing a location for our support centers. So, Sibiu was a natural choice as the local workforce is well trained and many people speak foreign languages, German in particular, which is a requirement for many of our positions,” Vladimir Sterescu, the country manager of CGS in Romania told BR. The company has also enjoyed the support of the authorities, who were “very open to the investment project and made it possible to develop a new business in town”. Sterescu added, “The public transport company even changed the name of the bus stop close to our support center to CGS.”

The skilled workforce is Sibiu’s main selling point, but the Transylvanian city has more to offer. “It is one of the most important cities in Romania and the numbers prove it. It has a population of about 375,000, the unemployment rate is below the national average (…), the GDP per capita is above the national average and the local business culture is very open to new things; so I personally see only advantages,” he explained. Should the announced infrastructure projects such as the Sibiu-Pitesti highway be carried out, this will only strengthen the city’s position as a business destination alongside its travel reputation, he added.

On the topic of tourism, Sibiu is now one of Romania’s best known travel destinations, boasting numerous sights and a rich cultural scene. After it was designated European Capital of Culture in 2007, the city made good use of the resulting EUR 50 million available and the opportunity to promote itself in Europe and at home. This gave momentum not only to local tourism but the entire local economy. Further investments followed.

“We opened an Ibis hotel in Sibiu in 2009. The choice of Sibiu was closely linked to the impact that its role as European Capital of Culture in 2007 has had on the hotel industry. Since then, Sibiu has become a highly sought after tourist destination,” Andreea Gheorghiu, GM of Ibis Sibiu, told BR.

She sees Sibiu today as a dynamic city with a business culture of its own which has managed to attract a significant number of important investors, industrial players, retailers and more recently real estate developers. “I also see an intense rhythm of investments in IT and other services. Depending on the area of activity, of course, Sibiu can be an alternative to Bucharest especially because it has many well trained and educated professionals and I think even more will be attracted here by the quality of life,” she concluded.