BR EXCLUSIVE: A short talk with Robocop’s founder about what the first smart police robot can give to the world. Next step: Nurse robots! VIDEO 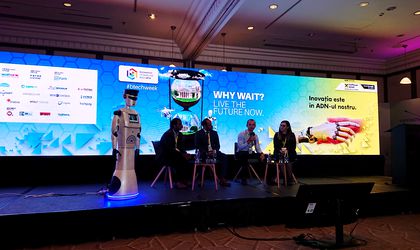 Robocop is a movie that sparks people’s imagination about an unbeatable police officer that can bring justice without prejudice. But today we are closer than ever to have a real Robocop, a robot that will do some of the police work and maybe in the future can even become a real replacement officer.

The designer and manufacturer of the smart police robot is H-Bot Robotics, a Hyderabad, India, based company that started only one year ago and today is presenting the robot at Bucharest Technology Week 2018.

The robot imitates the job of a police officer and can take complaints, detect bombs, interact with people and answer their queries, and also can identify a person convicted of a crime or searched or a crime that is being committed. One of the main changes from all the robots used in the past is that the robot is humanoid, it resembles a person with hands and a face, so it can be easier to get acceptance from people.

The smart cop can move on wheels and can get to a speed up to 15 km per hour. ”We are now developing four specialized robots, one for police, one for hospitals, one for malls and one for agriculture”, says Kisshhan Payyaula Sai Venkat, founder and CEO of H-Bot. „The major difference from other robots is that it can identify a crime. So if you try to hit a person or if you are running it can identify you as a suspect. That is a major technology that we bring with this robot,” says Payyaula.

Also, the cost will be much lower, ”between 50 to 60 percent lower than any other robot in the world”, said the founder for BR. The estimated cost of one Robocop will be around USD 6,000 and it should be in mass-production from December this year.

”We invested around USD 1 million so far in the development of the robot”, says Payyaula. At the presentation the robot was not able to move because it was powered by an electric cord from a power socket, but normally it will be on batteries.