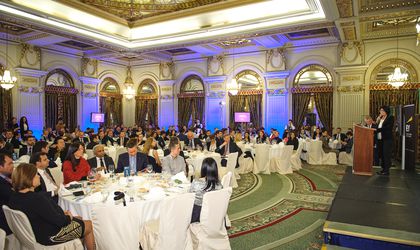 “In 2013 we got the courage and confidence to act. You were entrepreneurial, you took more risks and in exchange made bigger profits,” said Ilinca Paun, managing director of Colliers Romania and president of the BR Awards 2014 jury, introducing the ninth edition of the ceremony.

Business Review Awards 2014 in a nutshell: Winners and impressions

The gala evening opened with the award for Sustainable Business Practices, won by Holcim for the EUR 15 million waste recovery facility in its cement factory in Alesd.

Picking up the award for Online Strategy for Business Development, Iulian Stanciu, general manager of eMag, announced that the company had ambitious plans. “We were a little bit noisy at the end of the year with Black Friday. I hope this year we will be less noisy and we will do more,” said Stanciu.

The Innovation in Technology accolade was given to MB Telecom for the Roboscan Aeria, an aircraft X-ray scanner. Commenting on the awards the firm has received internationally, Mircea Tudor, president of the company, said, “To be awarded in our country is ten times more valuable than any other prize outside of Romania.” He added that MB Telecom had been invited by the government of Switzerland to open a factory there.

The Best Start-up Supporter award went to Junior Achievement Romania, a top provider of entrepreneurship and economic education programs, reaching 180,000 students. Stefania Popp, alluded to a quote by French author Antoine de Saint-Exupery to highlight the vision entrepreneurs need: “A rock pile ceases to be a rock pile the moment a single man contemplates it, bearing within him the image of a cathedral.”

Banca Transilvania collected the award for the Best Financing Program for SMEs and Start-ups, having granted in excess of 18,500 new loans to SMEs in 2013. HP took home the gong for Best Employment Initiative. “We would like to continue to drive performance, passion and innovation at HP,” commented Ecaterina Ion, the company’s representative.

Felix Patrascanu, managing director of delivery company FAN Courier, was named Entrepreneur of the Year. Thanking his two partners and the friends who gave him financial support at the company’s beginning in 1998, he commented that he “never imagined we would get this far in such a short time.” Since its establishment 15 years ago, over EUR 20 million has been invested in FAN Courier and the company has grown to reach national coverage.

Xavier Piesvaux, general manager of retailer Mega Image, won the Business Leader of the Year prize. “Delhaize has given us a free hand to have our own strategy in Romania. […] We have ambitious plans for 2014. The expansion is just the visible part of our strategy and there are many other challenges in this tough market,” he said. Mega Image opened a total of 104 stores nationwide last year, giving it a network of 296 locations.

The Deal of the Year award, which was contested by players from the financial services and IT sectors, was taken home by Romgaz, for what was the biggest IPO in Romania, raising EUR 391 million through the sale of a 15 percent stake in the state-owned company. “In the last year, Romgaz has played a significant role on the local capital market, contributing through its stock exchange listing to the favorable development of a transparent and dynamic business environment, which will strengthen the company’s potential,” said Vasile Carstea, director at Romgaz.

Princess Marina Sturdza, patron of many charities, presented the award for Excellence in Business. “In a county that often awards prizes rather frivolously, often as a marketing gimmick, these particular awards stand out for their integrity and authenticity. (…) I hope that everyone present here tonight will come away with a sense of achievement and pride,” said Marina Sturdza.

Rounding off the night, the Excellence in Business award was presented to carmaker Dacia. “This prize goes to 17,000 people in Romania who work every day to design, produce and deliver Dacias in Romania,” said Anca Oreviceanu, communications director at Renault Romania.

Opinions from past and present jurors

“Congratulations to you and the BR team for putting in considerable hours of work, coordination and thought. Your organization’s commitment to recognize best practices and individuals has to be commended and appreciated”, Gerard Chandran, General Manager, Mondelez International.

“The judging process was very serious and it took up a lot of time on the jury members’ part. At the time when I was in the jury we met a couple of time, discussed the categories, analyzed and confirmed the proposals for each of the categories. We made a shortlist of nominees until we reached a consensus. It was a very interesting and serious judging process that allowed me to know more about Romania’s success stories” – Steven Van Groningen, president & CEO Raiffeisen Bank.

“I must admit it was an honor for me to be elected president of the jury, all the more since in the beginning I was skeptical about the project when the Business Review team presented it to me. I had the same reaction as many others involved in judging processes: I will get the proposal list, we will give our opinions and see what comes out. I was however pleasantly surprised to find out that there was an entire action plan: meetings of 2-3 hours with all the jury members, differing opinions on proposals, demand for extra information and we even modified categories. (…) All the companies that entered the race can successfully enlist in the party that will make the transition to a new economy based on innovation. This is what made the juding process a challenge for us” – Traian Halalai, EximBank president.