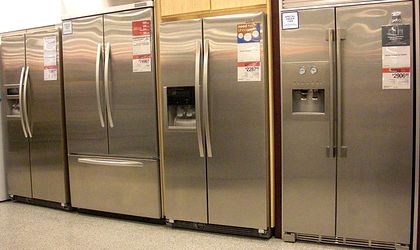 Romania’s durable goods market reached EUR 2.3 billion in the last quarter of 2015, increasing by 13 percent over the previous year, according to GfK’s TEMAX study. Except for the photo segment, all others contributed to the year-end performance, with telecom taking the lead with a 33 percent increase, followed by white goods (up 23 percent), small appliances (up 21 percent), household appliances (up 13 percent), printers and consumables (up 8 percent) and IT (up 4 percent).

Over the same period of the previous year, the market posted an 18 percent increase, aided by Black Friday and Christmas sales, according to the study.

Large household goods reported growth across all segments, rising 23 percent over the previous year, totaling EUR 171 million. Alongside the main market sectors, refrigerators and washing machines, freezers were an engine of growth, especially in the last month of the year. Black Friday 2015 campaigns have brought higher sales for all categories, with price erosion.

The double-digit growth rate of the small household sector in 2015 was mainly due to sales registered during the last quarter of the year, when the market reached a value of EUR 54 million. Razors and waxing products took the lead, while most segments of this market posted rises of over 20 percent. Sales were also boosted by premium products, such as pulsing light appliances (IPL).

TVs pushed forward the electronics market at the end of 2015, with sales being strongly influenced by promotional activities of Black Friday and Christmas. TVs continued on an upward trend, both in volume and in value, with large diagonal products being a powerful engine of growth for the sector. While “many of the traditional categories still suffer after a long-term decline,” according to the study, demand for new technologies is on an upward trend when it comes to cameras, soundbars or Bluetooth docking speakers.

The IT market has rebounded from the fall of the previous quarter, reporting a value of EUR 172 million. While tablets continued on a negative path, with a double digit drop, portable computers registered an increase in demand, especially for products with powerful processors and dedicated graphics card. There was a positive result for sales in desktops, monitors, and category mice and keyboards also during Q4 2015.

With a market value of EUR 20 million, the printers and multifunctional equipment (MFP) market jumped 8 percent over the same period of the previous year. MFPs saw a double digit growth, while toners have kept on a downward trend.

The photo market has also been on a descending path in Q4 2015, dropping 7 percent year on year to EUR 11 million.