Biggest beerhouse in Eastern Europe, set to open in 2014 in Bucharest 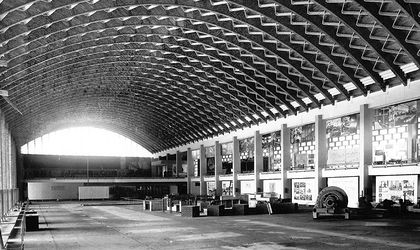 Following an investment of over EUR 2.5 million, Pavilion H (located in Herastrau Park, near Piata Presei Libere) will become by next summer the biggest beer hall in Eastern Europe. eMag owner, Iulian Stanciu, is behind the initiative, along with two other Romanian entrepreneurs, writes b365.ro.

Presently, Pavilion H operates as a commercial center, housing several shops and clothing stores. The store owners have been informed that they need to pack-up and leave the premises to make way for the new locale which will be called Beerhouse H.

“Under the Beerhouse H brand we can use the space as a restaurant, but during the weekend we will rent the room for concerts, shows and theater productions. We will not allow wedding though”, Vlad Dumitru commented, own of the major stockholders for the new business.

Pavilion H was built in the ’50’s to be used as an exposition space, but turned into a commercial centre at the beginning of the 90’s.
Brewery H will have to compete with other more popular established brands in the Bucharest nightlife landscape. One of these is Caru’ cu Bere, established in 1879. The restaurant owned by Dragos Petrescu services 2.000 patrons a day, 80% of which are foreigners, according to zf.ro.