Bastille and Placebo to attend this year’s Summer Well 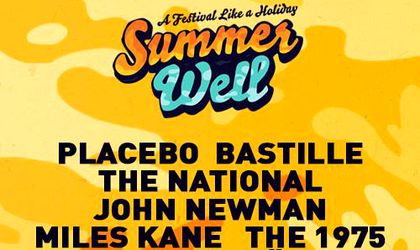 The 2014 edition of Summer Well will bring to Romania several newcomers but also long time favorites. Bastille, Placebo, The National, Tom Odell, John Newman, Miles Kane, The 1975, Chloe Howl, Reptile Youths and Prides have been confirmed today to participate at the music festival that will be held between August 9 and 10 on the Stirbey Domein.

The festival returns in the second weekend of August for two days of music, art performances and new technologies.

2-day passes will be available on www.easytickets.ro and in Orange shops (Eventim network), priced at 199 lei.

Exclusively in Orange shops and only between the 10th and the 30th of April, the tickets can be purchased at a promotional price of 159 lei.

What started out as a solo project, Bastille ended up selling over 2.07 million records only in the UK. Dan Smith, later joined by  Chris Wood, William Farquarson and Kyle Simmons, received a great amount of attention. Songs such as Overjoyed, Bad Blood, Pompeii, or Flaws, have left fans craving for more. After their success with their first album, Bad Blood, they have announced to already be working on their second one. Now, we get to see them for the first time on Romanian grounds.

The festival also brings familiar faces, like Placebo, needing no introduction. Since their birth in 1994, the band has gone through a lot of changes, leaving Brian Molko, Stefan Olsdal and Steve Forres as today’s member. The world renowned band has released in September their seventh album, Loud like love.

The National was formed in 1999 in the states. Through the early years, the members have worked day jobs while perfroming night shows. The band’s six albums consist of lyrics described by some as dark and melancholical. The latest album, Trouble Will Find Me, was nominated for Grammy’s best alternative album.

Tom Odell gained everyone’s hearts with his single Another Love, whether they heard it in BBC’s schedule advertise. or on Burberry’s fashion runaway shows.  Odell stated that he draws inspiration from his daily life and relationships.

The 1975 consists of Matthew Healy (vocals, guitar), Adam Hann (guitar), George Daniel (drums), and Ross MacDonald (bass). Their debut album was number 1 in the UK Albums Chart, produced by  Mike Crossey who has previously worked with big names such as Arctic Monkeys and Foals. Their music exploits themes that are representative for the mindsets of their age group.