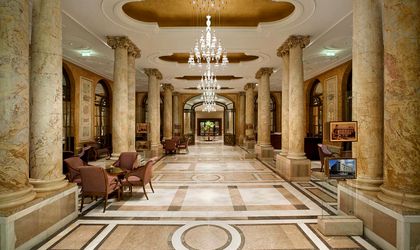 This year, the Athénée Palace Hilton Hotel celebrates its 100th anniversary. BR took a look at how the hotel has changed over the last century.

The building of the Athénée Palace began in 1912 and was completed in 1914, at the start of World War I, when it had 149 rooms, 10 suites and a restaurant. Designed by the French architect Théophile Bradeau, the hotel had a French fin-de-siècle look and an international staff. “Here was the heart of Bucharest, topographically, artistically, intellectually, politically – and, if you like, morally,” wrote Countess R. G. Waldeck about the place in the 1930s. Her book, Grand Hotel, describes it as “the last cosmopolitan stage on which post-World War Europe and the new-order Europe made a joint appearance.”

“During the interwar years, and especially in the early stages of World War II, it provided the perfect venue for a short era of hard-drinking, devil-may-care decadence before the storm,” wrote journalist Dan Halpern about the location in his article The Walls Have Ears, in June 2005. The hotel was possibly Europe’s most notorious den of spies in the years leading up to World War II, noted various journalists and authors who visited it.

The talk of the town

Describing the hotel as it looked back in 1938, A. L. Easterman, a journalist on London’s Daily Express, referred to its “heavily ornate furnishings, marble and gold pillars, great glittering chandeliers, and the deep settees placed well back in the recesses of the lounge as if inviting conspiracy.” Later, in his book King Carol, Hitler, and Lupescu, Easterman called it the “most notorious caravanserai in all Europe … the meeting place of the Continental spies, political conspirators, adventurers, concession hunters, and financial manipulators”.

“Bucharest was delightfully depraved,” wrote the New York Times foreign correspondent (and nephew of publisher Arthur Hays Sulzberger) C.L. Sulzberger in the 1930s, in A Long Row of Candles, his memoir of 1934 to 1954. “I moved to the gaudy Athénée Palace to enjoy my wait for war.” It was a good plan. “This was a comfortable establishment with excellent service… a corrupt staff always seeking to change a customer’s money at black-market rates, and continual competition by ladies of easy or nonexistent virtue to share the warmth of a client’s bed,” Sulzberger added.

In his writings, Halpern notes, “The place was lousy with spies, not to mention ministers and diplomats and industrialists and the occasional fugitive king, and not to mention gigolos living on blackmail and dangerous ladies in silver furs, and certainly not to speak of journalists. Indeed, the hotel’s strategic location drew scores of British and American writers, who saw Bucharest as an ideal vantage point from which to watch the developing war. British intelligence was there in force, Gestapo agents were all over the joint, and the spies of King Carol II’s police chief were crawling out of the closets.”

The hotel was modernized between 1935 and 1937 by architect Duiliu Marcu. Having suffered bomb damage during World War II, it was remodeled once it was taken over by the Communist government in 1948, before again sustaining damage in the Romanian Revolution of 1989.

In 1994, the Athénée Palace closed its doors. The hotel was sold at auction to Hilton International, which began a USD 42 million renovation in 1995, reopening the property in 1997. In Business Review issue 18, from May 1998, our journalists wrote that the reopening was attended by the minister of tourism Sorin Frunzaverde, mayor of Bucharest Viorel Lis, chief executive officer of Hilton International Davis Jarvis and Dan Mihai Opran, chairman of the hotel’s owners, the Athénée Phenix Group.

Expanded to 272 rooms (including five presidential suites), the Athénée Palace Hilton resembles the old hotel fairly closely, despite a healthy dose of modernization. “The famous English Bar, dimly lit and full of plush red couches, is more likely to contain young American businessmen with the beginnings of wealthy waistlines than it is to hold femmes fatales eliciting state secrets,” commented Halpern in The Walls Have Ears.

In 2005 it was bought by Ana Holding, which is currently managing the hotel. In 2011 the first floor and the restaurant area got a facelift.

Flavors of the past

For those interested in tasting original dishes that evoke the hotel’s history, Chef Marco has prepared some culinary treats, such as magret de canard with chicory and mashed cherry, served over the years in the famous Le Brasserie, and the special anniversary recipe, a delicious crust dark chocolate, marzipan and walnut crisp soaked in lemon syrup and wrapped in cream cheese and quince jam. And the Amalfi cocktail, the favorite drink of the Countess Waldeck, is on the drinks menu.