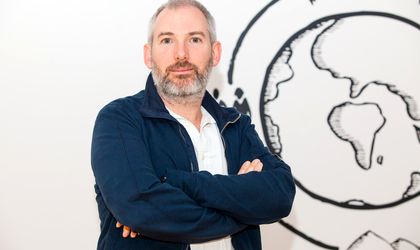 Digital money transfer service Azimo, based in London, announced in November the launch of its reach to Romania and the Republic of Moldova, with a 30-minute cash pick-up service in close to 600 locations including Idea Bank and BCR Smith & Smith branches in Romania and Victoria Bank branches in Moldova. Michael Kent, CEO and founder of Azimo, which in May raised USD 20 million in financing, tells BR about Azimo’s plans in Romania, a market with at least 3 million migrants.

How did your entrepreneurial story lead you to setting up Azimo?

I worked in the money transfer industry nearly 10 years. Before I started Azimo, I set up a traditional money transfer business called Small World Financial Services and it became quite big, it was number 5 globally in money transfer. I sold that company and I kind of figured there had to be a better way. The way customers led their lives had changed a lot in those ten years. So, together with my partner, we thought that if we were to start again with a blank piece of paper, how we would design a business to serve this customer need, which is to send money internationally very easily, quickly and cheaply. And that is how we came up with the idea of Azimo, three years ago.

In May, you received USD 20mln financing. How did you invest that money up to now?

We have been quite conservative in spending that money, but our main business target is to market the service. We do our marketing in two ways: we do digital marketing, increasingly targeting people on their phones, so it won’t surprise you to know that we do marketing with Google, and also with Facebook, because a lot of our migrant populations, particularly Romanians, love hanging out on Facebook. On the other hand, we have quite a lot of stuff that happens offline, because we have lots of Romanians working for the company, going out talking to people about the business. So right now, over 50 percent of our customers come to Azimo through word of mouth. We spend money on marketing in 2 ways: first, with the traditional and local events, community marketing and digital. The other thing we spend money on is just building up a platform because, as a financial services business, we are regulated. So we built the whole system with 4-5 developers, we now have 25 people in our development team and they are constantly working to improve it. If you looked at Azimo two years ago, it worked, but it was a bit clunky and we are trying to streamline that experience.

How hard was it to find investors for your business?

Raising money into a business today is like walking up the stairs, you can’t jump all the way to the top. Initially, I funded the business myself, together with my business partner. We got some initial product and research done, we had a viable business proposition before we had to go out and raise money from investors. And then we took money from angels: Matt Cooper, one of the big founders of Capital One, a big bank in the US and David Yates, who used to run First Data. Talking to your readers, one of the first steps would be to get very credible early-stage guides. They might not give you millions but they will give you some money and you can borrow their reputation. There are quite a lot of people in Romania who have made a lot of money in financial services. If you can get those guys investing even at an early stage, it will give much more credibility with more institution investors. So after we raised money from angels, we took another round, this time of institutional money. It was very little actually, it was less than USD 1 million and that was our first institutional investor. It is very important to choose that person carefully to make sure they are fully committed to what you are doing and also that they know that things will change. Because when it is very early, if you give someone a very precise set of numbers, you know that it’s never going to be those numbers. Things will be different from now. And there are early-stage funds in Romania, there are also pan-European and financial services funds, so there are investors out there. But then, when you are trying to get in the fight for USD 10 million rounds, there are probably 20—30 people in Europe. That is unfortunate; it is hard for us because, even in London, we have a much less developed capital market than in America. I think still in Europe there are really good ideas that don’t get funded and really should. We do have an American investor, one of our investors is called Greycroft, it is a very well known East Coast hedge capital fund. The interesting thing about American investors is that quite often they want you to set up in America. For us it is not really the right thing to do because right now we are really focused on serving Europe.

How big is the money transfer market globally?

It’s USD 600 billion globally annually, according to World Bank estimates. That only refers to the formal remittance market. If you take the informal market – which is people sending money on envelopes in buses – things are different. For instance, I don’t know if you heard of Hawala, the informal Islamic transfer through mosques. So yes, there are a number of informal markets which could be equally big. They said that overall, the market could be USD 1 trillion a year. Europe is about USD 150 billion a year, of which Romania is USD 4 billion. Our main competitors are Western Union and MoneyGram.

How is your team distributed?

We have about three sets of people working across three locations. There are probably 85-90 people in the whole team. We have a London-based team, who do marketing, product, finance, and operations. We have a location in Krakow, in Poland, where we have a development and multilingual customer support hub. Krakow is great for that, it is a university town and there are people speaking lots of different languages. And then we also have people who are based in the markets, talking to the local customers, making sure we have the right relationship on the ground.

What are your targets in terms of financial indicators?

Right now, we are not a profitable business and we raised money because we wanted to keep accelerating our marketing spend. As we get bigger and bigger, our revenues will grow and eventually, we would like to be a breakeven business. At that point, there are lots of opportunities open to you: you can list on the public market; you can sell the business to a larger institution. But our number 1 target now is to just grow the business.

What are Azimo’s future targets on the Romanian market?

In a year, we would like to get to 1 percent market share in Romania. Romania has probably 3 million migrants, so that would be 30,000 customers sending about USD 40 million. It is very hard to estimate the market size, but if we can hit those numbers, we would be happy. Longer term, we have ambitions to be a big international company. The average transaction is around EUR 400 and Romania is almost exactly on the average.

So what are the next steps?

There are a couple of things. First, looking at the options we have with wallet providers such as Orange, Vodafone, Telekom, all those guys. Also, increasing the number of locations. We are working with Smith&Smith, trying to identify the areas where we don’t have locations to make sure those are opened up. We are going to start doing quite a lot of local marketing activity. The interesting thing about Romanians migrants is that they are exactly the same as Romanians, they listen to the radio and watch TV, so it’s exactly the same channels and brands. Therefore, we are trying to work out what is the best way to market to those people.

Are you interested in making other investments as well, maybe even in Romania?

I have my own investment company called Hexagon Partners and we invest into a load of consumer financial services.  I sit on the board of a UK challenger bank, which my business partner Rick is setting up. I have invested in a number of mostly UK businesses. We have also started to make a couple of investments in Poland, where Azimo’s back office is based and I think actually it is a very interesting place to invest because the domestic markets are growing. Romania is very close to Europe, it has access to the EU market, which is fantastically interesting. The development talent is ten times better than in London, you have very talented technical guys and I think they are starting to see product managers and business development people coming through the ranks. Quite often, they are trained externally in Western Europe or the United States and now they are coming back with these new skills and are trying to build interesting businesses. So yeah, I think it is really interesting.