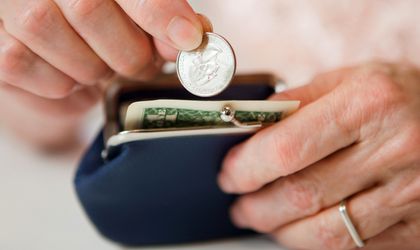 In the first quarter of 2015 the average monthly pension was at RON 890, showing a 5.1 percent rise quarter on quarter, while the average number of pensioners in Romania reached 5.3 million people, decreasing by 14 thousand persons against the previous quarter, according to the latest data by the National Institute for Statistics.

Territorial disparities were rather accentuated, with a gap between the minimum and maximum value of over RON 400 (RON 711 in Giurgiu versus RON 1,121 in Bucharest).

The ratio between the average number of state social insurance pensioners and the one of employees was of 10 to 10 at national level, also varying widely at territorial level, from only 5 employees to 10 pensioners in Bucharest to 18 to 10 in Giurgiu county.

In the first quarter of 2015, the total number of beneficiaries of EGO 6/2009, guaranteeing a minimum social pension level reached 558,000 persons, of which:

The real pension index against the last quarter of the previous year, calculated as the ratio between the nominal pension index and the consumer prices index, stood at 103.8 percent. This was a significant increase compared to the 99.9 value it had in Q4 2014, where it had been stagnating throughout the year.