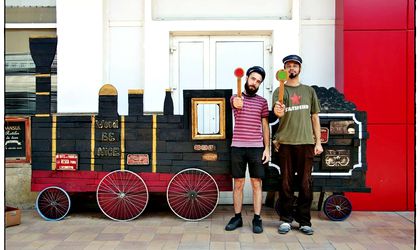 Behind the creative pun that Romanian artists Daniel Loager and Andrei Cornea have created for their brand (wood/would), there are some works of art that appeared as a result of their play, experiment and expression as a way of living. Daniel Loager has been a drawer since first grade, a passion that he rediscovered while he was working on redecorating his home. The two of them have met because Daniel was following Andrei’s blog and started a project with painted and decorated bicycles, which later was transformed into a creative studio, Wood Be Nice. BR has discovered the artists during an Art in Bucharest tour, in their studio, where several pieces of their wood work were exhibited there.

In January 2011, Daniel discovered wood photography studying different techniques on transferring images into the natural material. He researched about the substances that were supposed to be used and we gave our first try: an engraving on a small piece of wood showing a man on a cycle. As printing photography on wood appeared to be a success, we have decided to hold a wooden photography exhibition. A couple of months we did experiments with the wooden photography using the work of other four photographer friends and the varnishing day happened in April, under the name Wood Be Nice. Since then, we were present at different festival nationwide. Every year, we launched a new exhibition, a new artistic project.

What do you do at Wood be Nice?

We work every day – excepting Sundays; we prepare exhibitions, events, collages and wooden photography. Also, we work project based for pieces of furniture and decorative objects.

Which are the biggest pieces of art that you have created? What about the most important client?

Our biggest client is Grolsch beer which three years in a row supported us to create for them several projects such as a Pop-Up Squad in Cluj, another one in Bucharest, a conference room, a creativity lab at their new Ursus headquarters, and different pieces of furniture such as lamps and tables.

Do you have any favourite object from those created by the studio?

The gigantic locomotive created for Train Delivery, a 4x3m flamenco dancer for the Balkanik Festival, illuminating objects made of recycled materials for Femei pe Matasari event and a whole exhibition for Urban Arts Depot in Brasov are among our favourites.

How about the most difficult object to be done but still successfully finished?

Each piece has its own difficulty level, but once you find out the solution for it, you will not consider it as difficult as it was.  We could recall the bar-table from Occidentului Gallery, also the bench from the same location; these have been the first pieces of furniture which were big sized and more complex.

How much was the initial investment in the creative studio?

It wasn’t a significant investment. Luckily, I’ve already had some working tool in my house: I had once bought a polisher for my furniture, a lumberjack, a bench plane and had other two hammers from my dad. I brought them at the studio along with some dried wood, just to have some materials to start with. Over time, we started to buy things with our money; Andrei had received a bonus for Christmas and we bought some other working tools such as a milling machine.

Do you think that in Romania you can sell art or not?

Fortunately, a part of the objects we are making are also useful: it’s an artistic table, but it still is a table. It’s a decorative wall, but still a wall, and so on. Being useful and, in the same time, having an aesthetic design, then yes, it may be considered as a business field.