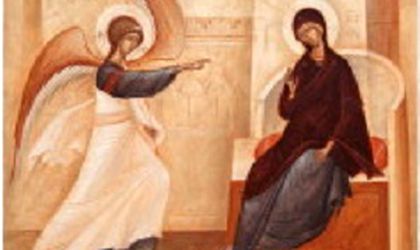 The second icons exhibition signed by Romanian artist Toma Chituc is on display at Byzantium Bookshop, under the general theme of Christmas but still following the first exhibition, where the main characters were from Annunciation, the Christian celebration of the announcement by the angel Gabriel to the Virgin Mary that she would conceive and become the mother of Jesus, the Son of God, marking his Incarnation.

The exhibition is curated by Vladimir Bulat, who also signed the preface for the book that contains all the icons of Toma Chituc. After a pause of six years, the artist returns with a new perspective,  more clear but also full of searches, bringing into public’s attention the same Annunciation theme, but in an improved form.

The event is more than an exhibition, is a meeting between words, icons and past consequences of the workshop of a representative iconographer for Romanian Orthodox space.

The exhibition will remain open until January 6, 2014.