Anti-judiciary laws protests in Romania: Tens of thousands call for resignation of government 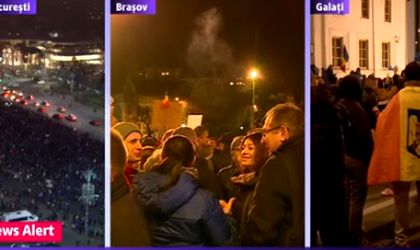 Over 25,000 people were protesting in Bucharest on Sunday evening, while several thousands more took to the streets in the main Romanian cities, against planned changes to the judiciary laws.

The protests have been taking place constantly in the past Sundays. This time, representatives of trade unions, NGOs and leaders of the political opposition said they would attend the protest. The protesters fear that the changes to the judiciary risk undermining Romania’s anti-corruption efforts.

The people are calling for the resignation of the center left government led by Mihai Tudose. The PSD-ALDE coalition has initiated the changes to the judiciary. The coalition controls both chambers of the Parliament.

“Justice, not corruption,” shouted those gathered near the government building in Bucharest.

The protesters have also asked for the resignation of the heads of the two chambers of Parliament. Liviu Dragnea, the head of the Social Democratic party (PSD), is also the president of the Chamber of Deputies, while Calin Popescu Tariceanu, the founder of ALDE, leads the Senate. Both Dragnea and Tariceanu have been prosecuted by Romania’s National Anticorruption Directorate (DNA). Recently, the leaders of PSD and ALDE suggested they were victims of the “parallel state”, claiming this structure comprised judges, prosecutors and intelligence officers that wanted to “silence” political targets. They failed to provide any evidence on this allegation.

Meanwhile, president Klaus Iohannis said he would pursue all the constitutional procedures to block the changes to the judiciary. MPs have already passed amendments in special committees that would prevent the head of state from refusing any appointments of presidents and vice presidents of Romania’s High Court.

“Eventually, things have to be clarified and understood, so I will get involved constitutionally in this process,” said president Iohannis earlier this week.

Meanwhile, the opposition party USR has challenged at the Constitutional Court the creation of the special committee in Parliament tasked with debating the judiciary laws. The constitutional judges are set to discuss the request in mid-December.