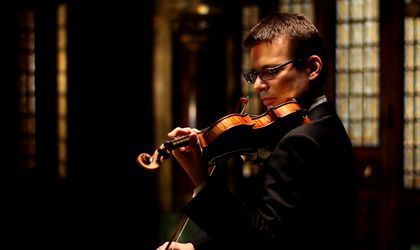 Romanian violinist Alexandru Tomescu will be playing the Fantasia-Appassionata, composed by Belgian violinist Henri Vieuxtemps, on Wednesday, March 16, at 7pm at the Sala Radio, according to a press release from the Romanian Radio Orchestras and Choirs.

Tomescu will be playing on the 1702 Elder Voicu Stradivarius violin and the event will be presented together with the Romanian Radio Chamber Orchestra.

Radu Postavaru, currently main conductor of the Ploiesti Philharmonic Orchestra, will be conducting the March 16 concert. Throughout the evening Antonio Rossetti’s Sinfonia di caccia, Gustav Holst’s St. Paul’s Suite and Mozart’s Symphony no. 2 in B flat major will also be performed.

In 2013, the Romanian violinist earned the right to play the Elder Voicu Stradivarius violin for the second time, following a national competition organised by the Ministry of National Culture and Patrimony. Used for four decades by Ion Voicu, the violin is considered to be one of the most beautiful and well preserved Stradivarius violins in the world, says the Romanian Radio Orchestras and Choirs press release.