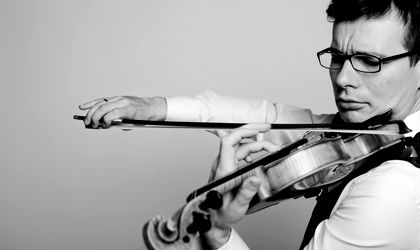 Alexandru Tomescu, violin soloist with the Radio Orchestra and Choir is hosting his first concert in the new season of the Radio Hall on Friday, October 16 (19.00). At the same time, the event presented by the National Radio Orchestra under the baton of Mihail Agafita, chief conductor and artistic director of the Symphony Orchestra of the National Philharmonic of Moldova, propose a special meeting with the Czech symphonic repertoire. Spectators will have the chance to enjoy two scores signed by the greatest composers of the Czech Republic: Vltava – Smetana’s famous composition, and The VIII Symphony by Dvorak, considered the most popular Czech composer.

The evening will open with Vltava (Bedrich Smetana) – the best known part of the suite of six symphonic poems Má Vlast (“My country”), each poem being a description of places, history and legends of Bohemia. The work presented at the Radio Hall, also known under its German name Die Moldau, follows the imaginary route of one of the biggest rivers in Bohemia from source to estuary, evoking musical scenes of village life, ruins, castles and the Prague, which Vltava traverses.

Alexandru Tomescu will then offer his interpretation of Violin Concerto in E minor for Violin and Orchestra signed by Mendelssohn, a beautiful work of romantic repertoire.

The event will close with Symphony VIII, creation of Antonin Dvorak, music premiered in Prague in 1890 by Dvorak himself.

The concert will be heard live on Radio Romania Cultural and Radio Romania Muzical and streamed live on www.romania-muzical.ro and www.radiorormaniacultural.ro. Tickets are available on www.eventim.ro, in Germanos, Orange, Vodafone, Domo, Carrefour, Carturesti, Humanitas, in OMV filling stations and the Radio Hall ticket office.