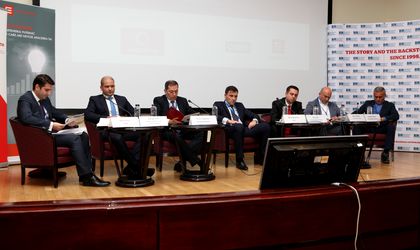 Romania has taken concrete steps towards improving its agricultural productivity over the past years, albeit progress remains slow, discussed participants to the agriculture conference part of the Foreign Investors Summit organized this week by Business Review.

One problem that continues to hinder productivity is land fragmentation, said George Turtoi, state secretary with the Ministry of Agriculture and Rural Development. “About 80 percent of the country’s farmland is divided among farmers who own between one and five hectares. There are some 800,000 such farmers,” he said. With the new National Program for Rural Development (NPRD) and new rules for allocating subventions the authorities are hoping to change this by offering farmers incentives to create and join cooperatives and producer groups. Such measures include a subsidy level for farms or associations that own between five and 30 hectares higher by EUR 45/hectare, said the official. Farmers who opt to join forces in such an association also benefit from 20 percent more funding for investments and dedicated application procedures in the NPRD for 2014-2020, went on Turtoi.

Until some of these measures will produce effects, land fragmentation remains a problem for both local and foreign investors. “It is very hard to explain to an investors who is looking to buy 5,000 hectares, 10,000 hectares of 20,000 hectares of farmland that this land will be scattered across several villages,” said Mihai Macelaru, associated partner with Noerr.

Despite such setbacks, more and more entrepreneurs and companies are venturing to invest in farming businesses and banks are more willing to cater to their financing needs.  “Why do banks invest now in agriculture and why more than before? It is not something that we have discovered overnight. What has happened is that businesspeople are starting to capitalize on the existing potential. Therefor it is only normal for banks to make their presence increasingly more felt,” explained Dan Bota, head of the small business division with Intesa Sanpaolo Bank.

With financing becoming more available, the industry is projected to step up its growth by enabling farmers to have an integrated approach to production and thus boost productivity. “In order to post yields that are higher than the average of about four to five tons per hectare reported presently for crop production, and reach at least seven, eight tons per hectare, one needs to focus on all the inputs involved in the process,” said George Stanson, business manager for Romania, Bulgaria, Croatia and Serbia with Case IH & Steyer Balkans.

Increased productivity accompanied by the creation of local value added production chains would enable more and more farmers to reach the shelves of large retail chains, argued participants. For example, some 98 percent of the private label grocery products that Carrefour is selling in Romania are produced locally, says the retailer. “We are working with more than 780 local producers who supply us mostly with fruit, vegetables and traditional products,” said Florin Capatana, director corporate affairs& sustainable development, Carrefour Romania.

Such progress remains slow but there are positive developments in the industry, argued participants. “We see a very encouraging change. If things will continue in the same direction, in 2020 we will probably be able to talk less about potential,” concluded Stanson.