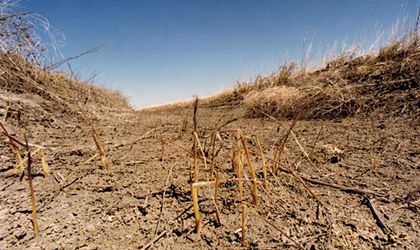 The drought has caused local farmers severe losses and the situation calls for the declaration of the state of emergency said Laurentiu Baciu, president of the Romanian Agricultural Producers’ League (LAPAR) according to Mediafax. He stressed that some 80 percent of the local corn production could be compromised.

One of the effects of the state of emergency is that Romania must cease all grain exports.

“I asked for the state of emergency due to the drought, and the minister told us to go look the term up. We looked in the dictionary and saw that among others, the government declares state of emergency due to natural disasters, including drought. Thus, the state should act immediately by stopping exports and properly managing existing grain stocks and putting into operation all irrigation facilities, “said Baciu.

He argues that Romania’s grain reserves should last for no more than two months and after that local companies wil have to import.

In his opinion over 80 percent of the corn production could be compromised and the sunflower production is 50 percent lower. Wheat production too, was reduced to only half of last year’s harvest while prices have doubled, Baciu added.

Representatives of the Ministry of Agriculture have said that the state has taken measures to fight the effects of the drought but that the declaration of the state of emergency is not necessary.