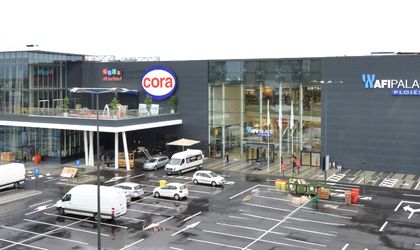 The second mall to be delivered this year in Romania, AFI Palace Ploiesti, was opened today, following an investment of over EUR 50 million, announced the developer, AFI Europe.

The mall features 33,000 sqm of leasable space and is being promoted as the first modern shopping mall in downtown Ploiesti. However, the project will be the second of this kind in the 200,000-inhabitant city after Carrefour and New Europe Property Investments (NEPI) opened a 55,000-sqm shopping mall on the outskirts of the city in November 2012. Ploiesti Shopping City is located close to National Road 1 (DN1), which connects Bucharest to the Prahova Valley, and required a EUR 65 million investment.

AFI Palace Ploiesti is located on the Gheorghe Doja Street and is “leased close to 100 percent”, according to the developer. It is anchored by a 13,000-sqm Cora hypermarket. Other tenants include H&M, Musette, TimeOut, Intersport, Flanco, Nike, Douglas, Otter, Lee Cooper, Il Passo, Kenvelo, and Leonardo. It employs some 1,000 people.

AFI Europe has been operational in Romania since 2005 and is probably best known for the AFI Palace Cotroceni shopping mall in Bucharest. In the project’s vicinity, the company is currently developing the AFI Park office project, whose first building was completed last year. AFI Europe says it will also invest in another office project in Bucharest, the 50,000-sqm AFIBusinessPark close to the J.W. Marriott hotel and the Romanian Parliament.

On the retail segment, the developer says it will open shopping centers in Arad and in the Bucurestii Noi neighborhood of Bucharest. AFI Europe also owns several plots of land for residential developments.