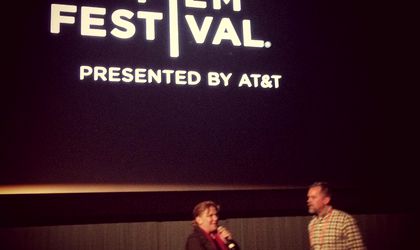 With Cannes releasing its competition line-up last week, with two Romanian films in the Un Certain Regard selection – Radu Muntean’s Un etaj mai jos/ One floor beneath and Corneliu Porumboiu’s Comoara/ The Treasure, and later with a new Romanian title announced in the La Semaine de la Critique competition (Andrei Cretulescu’s Ramona), it has only made NY film lovers rave more about the two Romanian films invited to the Tribeca Film Festival, now on its 14th year.

If you haven’t seen them yet, I’d urge you to do so. Both come from very different angles, approaches and genres to tune into a significant theme of Romanian life and history: the story of the Rroma. While Aferim is a historic film, shot in black and white, a horseback road-trip Western, Toto is an observational, finely tuned documentary bringing us close to a young family in contemporary Ferentari borough. Both films reflect realities and trigger critical questions for today’s Romania. They do it brilliantly. And the world has taken notice.

The two have been named among the 15 “must-see foreign films” at Tribeca. Here you can see what other productions have made the selection.

Over the last few days several people have said to me that I am  so lucky to come from a place like Romania; I live and make good stories there and it’s so cool that more and more people when they hear Romania go: yeah, that’s that place with all the good movies.  Someone else came up to me and begged for a list of must-see Romanian films. Also in bars and in cafes and on the hallways of the festival’s cinemas, I have heard people say: “I’ve heard/read that there are these two Romanian films in the line-up; they seem to be quite good; maybe we should get tickets to that.” Friends in NY have called and asked me if it’s true what they’ve heard: that the two Romanian films have to be checked out. So the crowds are talking. And they are talking in NY.

The two films have their North American premiere at Tribeca.

Toto and His Sisters is part of the Viewpoints selection, bringing together distinct visions from innovative voices, including both feature films and documentaries from China to France, Argentina to the US.

After the films have screened and the q&a is about to start it is quite reassuring to see almost no-one leave the hall before the discussion. This was the case with both Toto and Aferim.

The festival’s other gems, if you ask me, include the short film selection. Impressive and almost stunnings the Tribeca Interactive Conference, TFI, run by Ingrid Kopp who manages to bring together innovative artists and scientists, computer and technology wizards of the new formats of storytelling. No matter what, it’s still the stories that matter most. And we can tell stories in so many forms. Some of the platforms, apps and websites you should definitely take a look at and immerse yourselves in are {theand}, presented by IDFA’s Doc Lab, created by Topaz Adizes, Director and Nathan Phillips, Creative Director. They came to Tribeca and presented {theand} and everybody was both laughing and crying, pensive and provoked. It is the story of 52 real life couples (with more to follow) and the way they look at their relationships. I dare say no-one stays untouched. That is if you are willing to truly look at yourself, too – and your relationship(s), and also interact on the website.

Another interactive game extensively presented at the TFI Interactive Conference was Seven Digital Deadly Sins, Live”, also presented by IDFA LAB, where you get to see and understand what our new online selves are like. Not sure you know but there is no real life anymore, they call it offline now. And online is the other life. I could go on for hours about this; the thing is I still struggle with the fact that who I am offline, I am also online, and I am afraid I am starting to be among the very few. What about you?