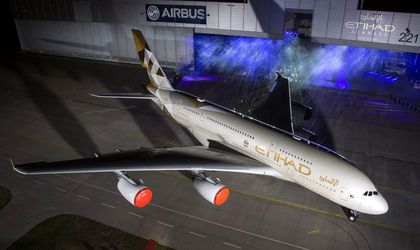 Etihad Airways unveiled its all-new livery design on its first Airbus A380 at a special ceremony at the Airbus site in Hamburg‎, Germany.

The airline’s first flagship aircraft‎ will now go through its final phase of cabin furnishing, followed by ground and flight tests, before being delivered to the Abu Dhabi based airline towards the end of the year.

Etihad Airways has firm orders for ten A380s and will become the 13th operator of the aircraft.

With 318 orders so far by 19 customers the A380 captures 90 percent of the Very Large Aircraft market. To date over 65 million passengers have been transported by A380.

Etihad Airways is the flag carrier airline of the United Arab Emirates. Established by royal decree in July 2003 and based in Abu Dhabi, Etihad commenced operations in November 2003.

As of August 2014, the A380 network covers nine out of the world’s top 10 international airports, and encompasses such major hubs as London-Heathrow; Dubai; Hong Kong; Paris-Charles de Gaulle; Singapore; Amsterdam; Frankfurt; Bangkok; Seoul and Kuala Lumpur, along with destinations such as Washington, D.C.; New York; Tokyo; Moscow; Rome; Manchester; Barcelona; Munich; Zurich; Toronto and other cities.