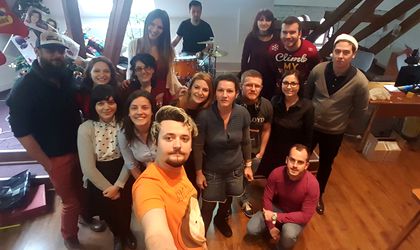 Grapefruit, user experience digital agency, announces two important changes in the company, starting the beginning of this year: Georgiana Dragomir, becoming the new general manager and the orientation of the business exclusively on the digital and mobile arias.

Georgiana Dragomir’s naming comes after the latest changes at the shareholders’ level. In this moment, the company is owned with 60 percent by Marius Ursache and with 40 percent by cu Georgiana Dragomir. The change came in the context of last year’s business’ and team’s consolidation.

Until the present day, the agency was offering services such as branding, strategy, brand strategy and up to communication campaigns. Starting 2016, Grapefruit is focusing its business towards offering digital and mobile services and also providing new technologies, such as virtual reality and augmented reality.

“We decided to focus on new technologies and deepening our competences in developing mobile applications. We have some extraordinary ideas of digital products that we are looking forward to implementing in 2016,” added the general manager.

Grapefruit also starts the year with a new team, at the end of last year the agency hiring 7 new people. “The recruiting of a single person took even up to 6 months, but we are sure to have chosen the best. Along the ones that are already part of the team for more than 3 years now they success in being a kick ass team – the way I like to call it,” also explained Dragomir.

2015 also meant for Grapefruit a portfolio of new clients such as Nestle. The agency has long-term business partnerships with clients like Dacia (alongside which Grapefruit will celebrate this year 10 years), but also punctual projects.

Georgiana Dragomir, the new general manager of Grapefruit, has been in the agency for 8 years now. She started as a project manager for clients such as Dacia, Renault, Philip Morris, NNDKP, Alevia, OTP Bank etc. During the last years she began to take on financial, recrutement, administrative and management responsibilities.